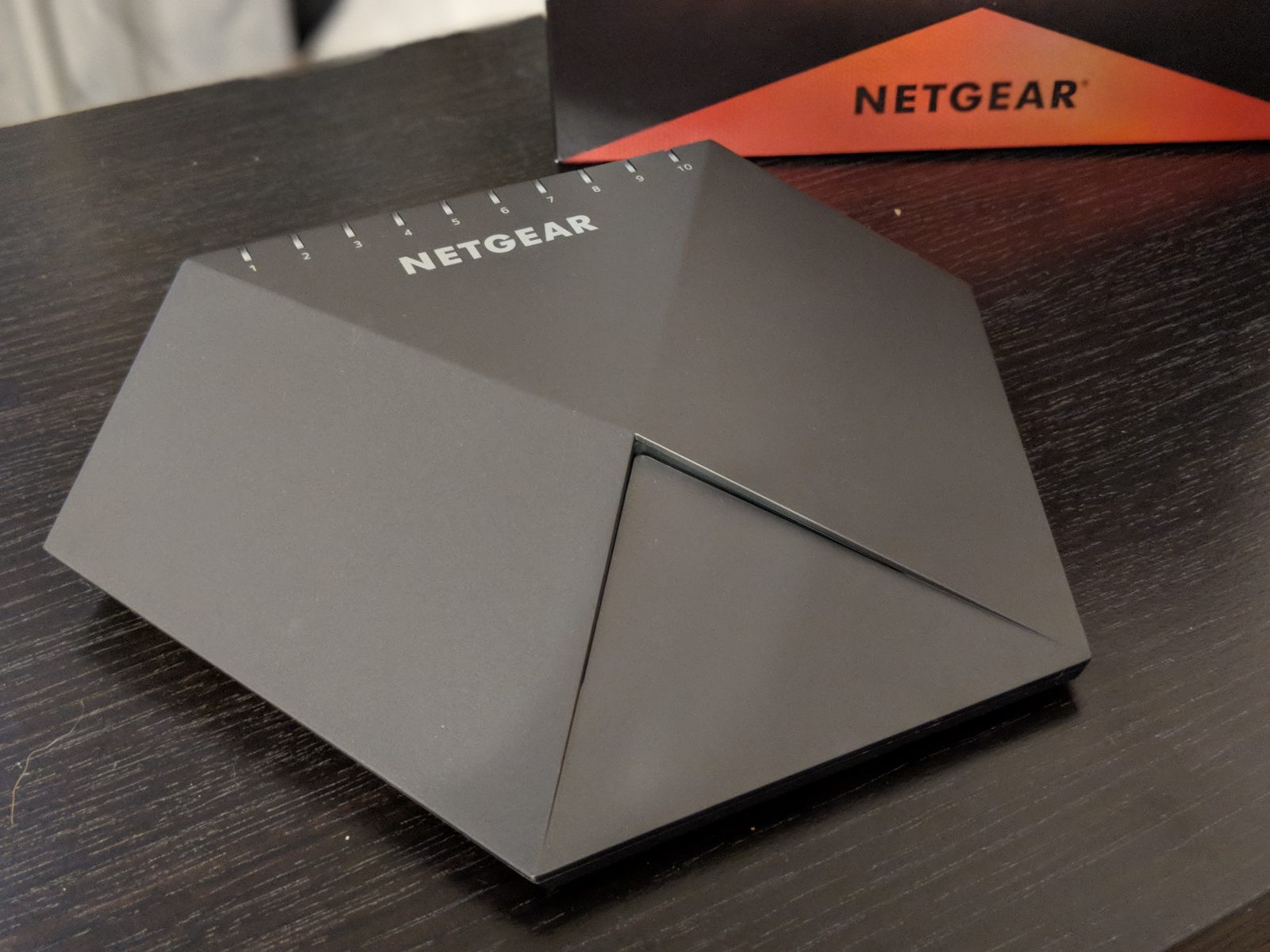 Facebook Twitter Pinterest Email
The Nighthawk Pro Gaming SX10 Gaming Switch provides a lot of ports and settings. But at the price point, is it worth it?

While I am not a heavy gamer, I have all the latest consoles at home. The latest consoles and a bunch of other gadgets that connect to my Wifi Network. Connecting all of the gadgets to the router is nearly impossible because of the limited number of ports. Netgear sent over their Gaming SX10 Switch to review. I recently reviewed the Netgear Nighthawk Pro Gaming XR500 Router and it strengthened the speeds for the devices connected. We decided to connect the PS4 Pro, Xbox One X, and the televisions. We use Netflix and Prime TV from the televisions often. We have Verizon Fios Gigabit service and I want to make sure I get the most out of the connection. 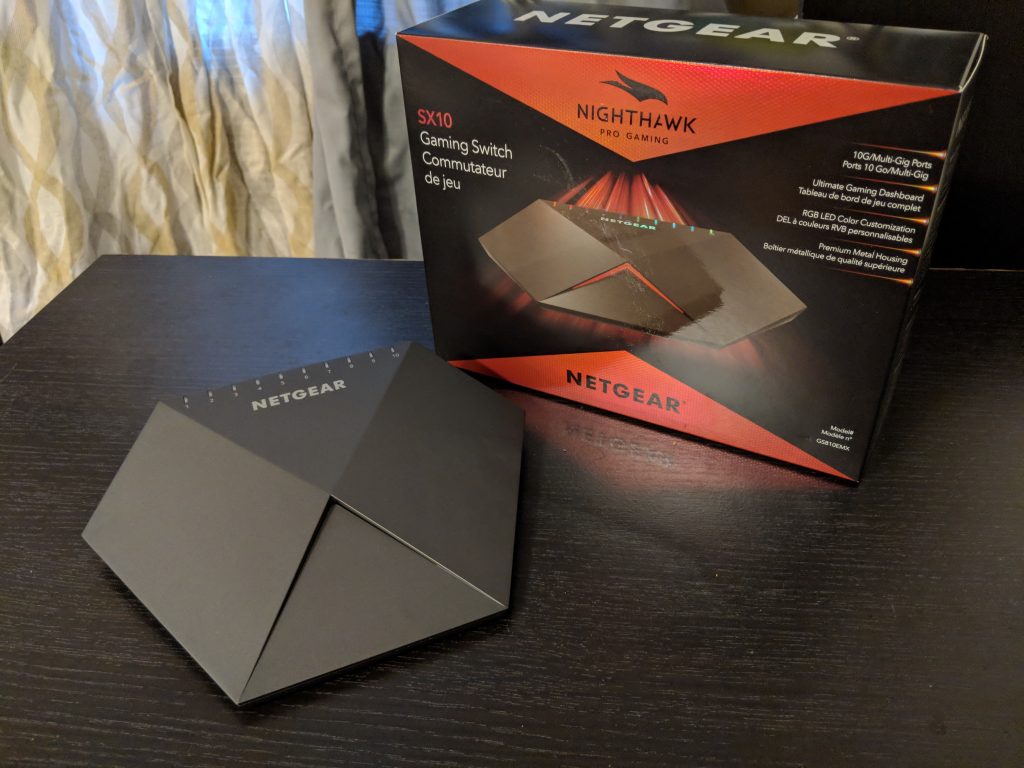 The Nighthawk Pro Gaming design switch has a familiar design to the XR500 router. Since the switch is part of my entertainment center, I like that it looks sleek. It has the look of a Nighthawk Pro Gaming device. It has 10 port indicator lights at the back, where the connections are. There is no power switch. The button you see there is to turn off the LEDs. There is another LED in the middle of the switch. For the most part the switch is flat. Even though it’s small, it feels heavy so it won’t be sliding around the shelf. 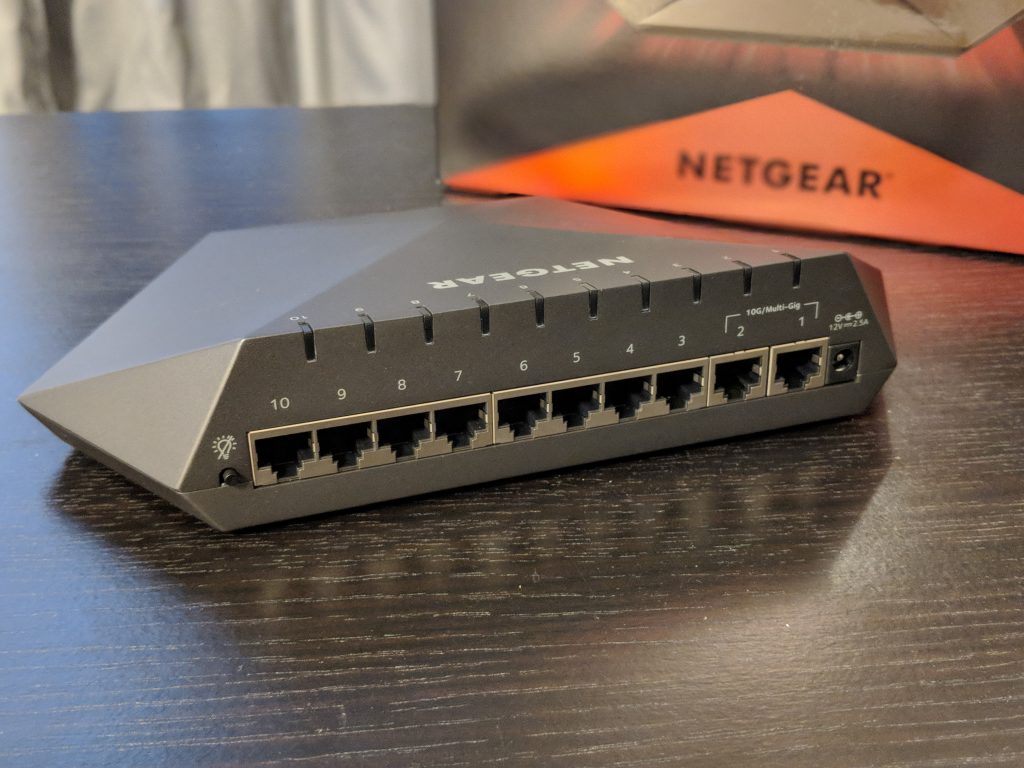 The Nighthawk Pro Gaming SX10 Switch is simple. In the box you get the switch, power adapter, and instructions. No ethernet cables. The instruction manual tells you to plug the LAN port 10 to the switch on the LAN port on the router that is connected to the internet. It’s pretty much plug-and-play setup. Port 1 and Port 2 are 10 GB for those devices that need a lot of power consumption. It may be your gaming console or PC. You can also combine them to create LAG groups (Link Aggregation Groups). Netgear even advises what cables you should be using for speeds. All of my cables are Cat6 and up, since I’ve been using the Orbi mesh network and the XR500. I believe the latest is Cat 7, so you can’t go wrong with either one of those. 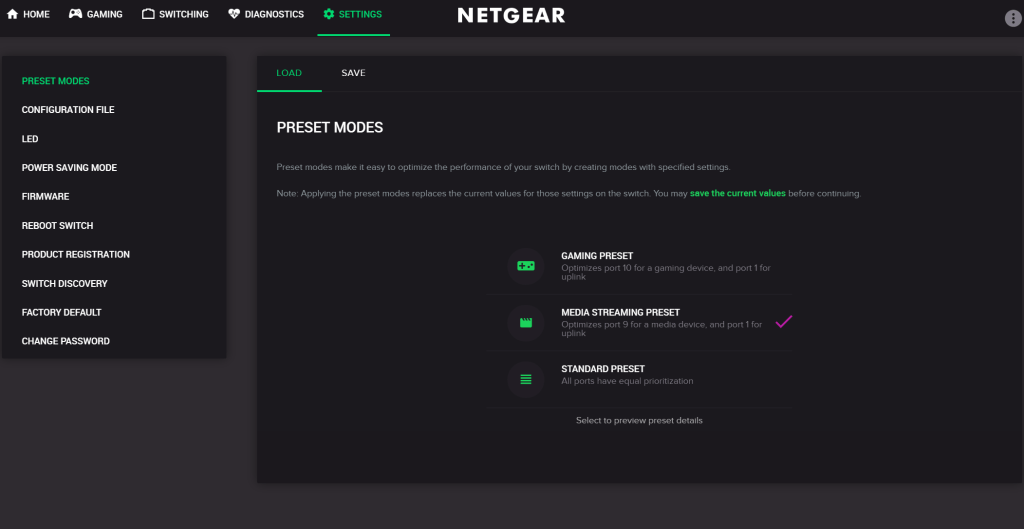 Just like the DumaOS app, you can login to a dashboard to monitor your usage. While I use it for more and stronger connections, if you’re tying in servers, laptops and multiple LAG, you can make the most out of this switch monitoring. 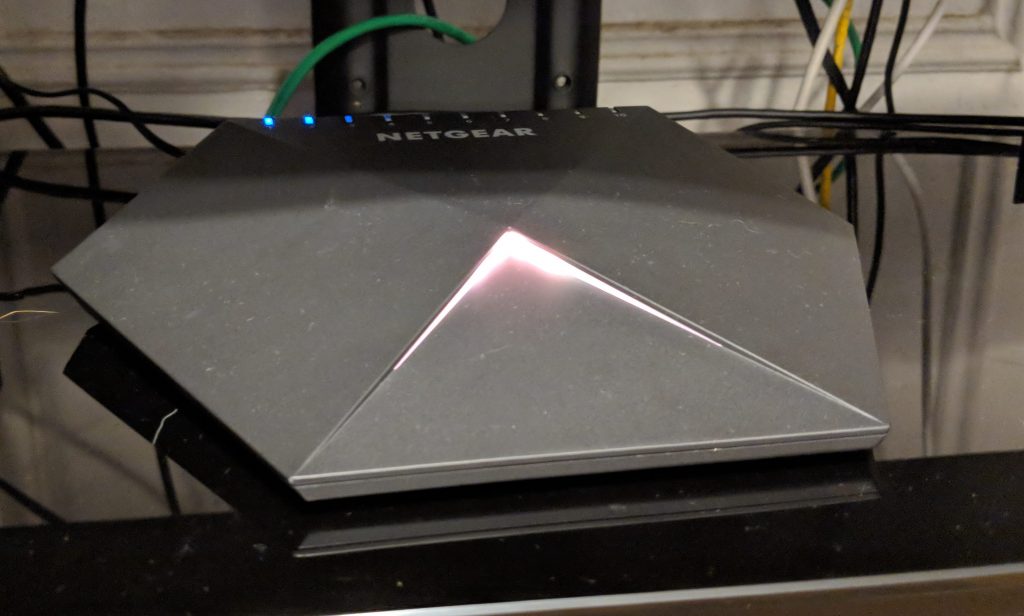 There are a ton of options, I wouldn’t mess with because it’s a bit complicated for what I need. The Gaming tab on the dashboard is pretty cool because you can see what is using the most bandwidth. While we haven’t been exhausting our connections, it’s pretty cool to see what is using more of a connection over other devices. I mostly messed with the Preset Modes option in the Settings tab and the QoS setting in the Switching tab. I used the Media Streaming Preset since that’s what we’ve been doing more of lately. No buffering or glitches. With the QoS tab you can set limits to each port and control to prioritize connections.

The SX10 is very, very popular, even at the price of $250. For gamers it’s the ultimate investment. If you host LAN parties, the switch would be a reliable for strong connections. Hight performance with easy setup is a win in my boodk.

If you want to build a reliable network, you can’t go wrong wit the SX10. If you feel that you’re good with just 8 extra ports instead of 10, you can go for Netgear’s S8000. It’s a little older and has a couple of less ports but it’s less than half the price at $93 on amazon.com. You’d be surprised how quickly you run out of ports with a router. While many things are wireless, there are a lot of high-consumption gadgets out there. I recommend it for a household that has multiple gaming consoles as I prefer consoles to be wired in steady connection. I love that Netgear takes out the complexities of setting up high performance networks.