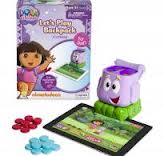 Technology is no longer a luxury. We are so used to our gadgets that we incorporate them into nearly all activities. Duo helps you get the most out of your iPad gaming with appcessories (apps and accessories) that are specially designed for game nights and mild interaction.

Discovery Bay Games has a diverse selection of apps that go hand-in-hand with their accessories. Trivia games, kids’ games, and even gaming for the old schoolers. Dora the Explorer Let’s Play Backpack
This game is for the younger kids. With the accompanying Dora app young children reinforce listening, logic, and Spanish skills. There are four different adventures; with three games on each. Not all adventures are included.

The backpack accessory (requires three AA batteries) is placed on the iPad; and it works well with the accompanying app. There are two different colored spots on the appcessory; green and orange. The game will ask you a question such as; “Which one belongs in the barn?” You are given two choices (labeled with green and orange).

You would put the token on your answer. The iPad keeps score. The point of the game is to get rid of your tokens the fastest. The token placement and spinning keeps young ones entertained and somewhat awed. Duo Plink
Similar to the Dora game; is Yoomi. It’s for older kids and adults. Questions are asked in the “Would you rather…?” form. It’s good for younger kids to play with each other. An entertaining after-school activity.“Smithsonian Artifact or Fiction” is all about outrageous True or False questions. When answering; the player one makes their selection in the secret compartment. Player two places his/her token in one of the two choices. The Plink device drops the winning tokens in the bank. You can play with up to six people. Duo Pop
Duo Pop is the most interactive of these games. You can play with up to four people. It is kind of a buzzer/trigger trivia game. When asked a question; the player who hits the trigger on the handheld popper first gets to answer first. The games include “Guesstimation”, “Highlights Hidden Pictures Countdown”, and “Saturday Night Live – The Game” Atari Arcade
This sis for the old gamers. The gamers that enjoyed the simple gaming. Duo’s most popular appcessory; the Atari Arcade is fun to play with. You can play old faves such as Asteroids, Centipede and Missile Command. It is very simple to use. You can play many games from the Atari Greatest Hits App on iTunes. It’s difficult not to get wrapped up in the gaming when playing these games with the joystick and game-pad.

With all the money invested in the iPad; these appcessories are great, not to mention affordable additions to your purchase. DBG and Duo have something for every member of the family. I think it’s great for the youngsters in the family to play more interactive games with a tablet than just playing “tapping” games.