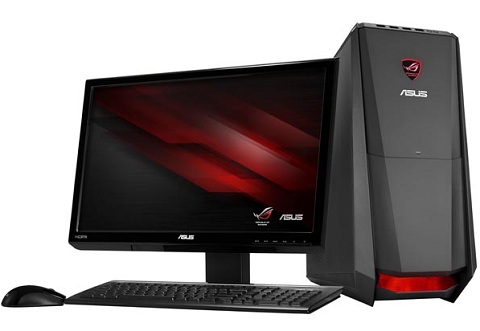 ASUS launches the ROG TYTAN CG8480 — a gaming desktop with an Intel Core i7-3770K processor with Turbo Gear function that enables full 4-core CPU instant overclocking to reach a maximum speed of 4.2 GHz. It comes equipped with the NVIDIA GeForce GTX 680 2GB GDDR5 graphics card that supports up to four monitors, while the 128GB SATA3 SSD delivers greater data access speeds than generic HDDs. Audio quality is further enhanced by an ASUS Xonar DX sound card, providing up to 35 times clearer audio than on board audio codecs, giving gamers an audio advantage over their opponents. All this powerful hardware is housed within an intricately designed polygonal chassis with built-in indicators that glow from blue to red depending on the overclocking mode it is in.

Dominate the battlefield with one-click Turbo Gear overclocking, which allows users to dynamically overclock the CG8480’s Intel Core i7-3770K processor without the need to reboot. The CG8480 instantly overclocks its 4-core to three different modes, while the DEFCON indicator and bottom grill lighting shows system readiness with blue and red LED lights.

Experience a high level gaming graphics with the NVIDIA GeForce GTX 680 graphics card, which is capable of producing smooth gameplay at high gaming settings. It has the power to support up to four monitors plus the option to game in NVIDIA 3D Vision Surround. The ASUS Xonar DX audio card powered by Dolby Home Theater technologies delivers 35 times cleaner audio quality (116dB SNR) than on board audio codecs — giving gamers an aural edge over their opponents. In addition, the blazingly fast response of 128 GB SATA 3 SSD delivers twice the data access speeds than generic HDDs, allowing gamers to quickly react during intense gaming situations even running with the most advanced games. These features are a must have for any hardcore gamer.

ROG is dedicated to providing stable performance for gamers. Numerous hours are spent on stringent pre-testing, and key components undergo a strict selection process. The intelligent chassis cooling is designed in such a way that cool air will be directed into the system from front grill and hot air will be exhausted out. The additional intricately-designed venting holes along the chassis aid in the overall cooling while the integrated liquid cooled CPU offers efficient and silent heat dissipation. With its intelligent thermal design, integrated liquid cooling and hours of strict pre-testing, the CG8480 is an excellent gaming desktop for gamers.

Asus gaming computers are always one of the best, graphics and speed are always amazing. Looking into adding this one to my collection.