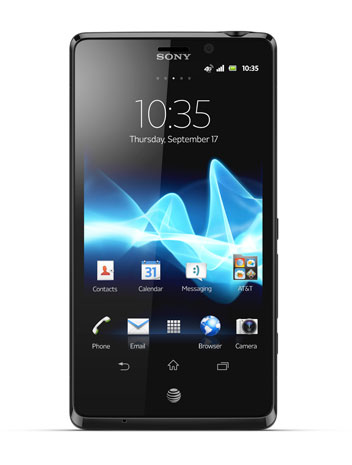 AT&T and Sony have teamed up to deliver another flagship phone; the Sony Xperia TL. The phone was initially announced at IFA 2012 as the Sony Xperia T. It’s “coming soon” to the AT&T 4G LTE network. They haven’t released any info on the release date or pricing yet.

Sony seems to be big on the NFC wave; as the phone will come with an NFC SmartTag in the box. The main feature on this phone is the 13 megapixel rear end camera, and it’s ability to quick launch from standby to snapping a pic (within 1.5 seconds). Sony is sticking with its “entertainment smartphone” wave featuring it in the new James Bond film; Skyfall. It will have exclusive content such as wallpapers, and ringtones from the movie on the device.

Using the Sony Xperia Ion earlier this year Sony has definitely stepped their game up; shipping the phone with Android ICS 4.0.4 and promising and update to Jellybean 4.1 soon. Check the press release below for the full list of features.

Photo enthusiasts will delight in the impressive images taken with Xperia TL’s 13-megapixel primary camera that brings even the smallest of details to life. This high resolution camera captures quality images swiftly with its quick launch feature, going from standby mode (sleep) to first shot in just 1.5 seconds,1 making sure life’s unexpected moments are not missed. Plus, both the rear and front-facing cameras deliver HD recording capabilities for vivid video capture on the go.

Xperia TL gives you the ultimate in HD with a superb 4.6-inch HD display (1080 x 720), powered by the Mobile BRAVIA® Engine for razor sharp clarity and brilliance. The viewing experience on Xperia TL is accentuated by a stylish, slim form factor that emphasizes the display. For those looking to take their content from their smartphone screen to the TV screen, Xperia TL connects through MHL or wirelessly through DLNA.

To make enjoying content across devices even easier, Xperia TL supports ‘One-touch’ connectivity through NFC. Now, you can conveniently and instantaneously enjoy your music and photos across an array of NFC enabled devices by simply touching one to another to establish a wireless connection without a cumbersome pairing process. To get started with experiencing NFC, Xperia TL comes with one Xperia SmartTag in box. Using near field communication technology, SmartTags let you store device preferences for a variety of locations and situations – like opening and controlling volume on the music player if you head out for a run, turning on GPS and Bluetooth in the car or turning on your alarm and silencing your ringer at night.

Geo-mapping in satellite and traditional map views
More than 25 editing options
Improved layout of photo and video folders, both in device and online

AT&T customers have access to the nation’s largest 4G network***, covering 275 million people. AT&T has two 4G networks that work together for customers, LTE and HSPA+ with enhanced backhaul. That means AT&T customers are able to enjoy a widespread, ultra-fast and consistent 4G experience on their compatible device as they move in and out of LTE areas. With other carriers, when you travel outside of their LTE coverage area, you may be on a much slower 3G network.

*AT&T products and services are provided or offered by subsidiaries and affiliates of AT&T Inc. under the AT&T brand and not by AT&T Inc.