Charging On the Go Just Got Cute Thanks to myCharge! 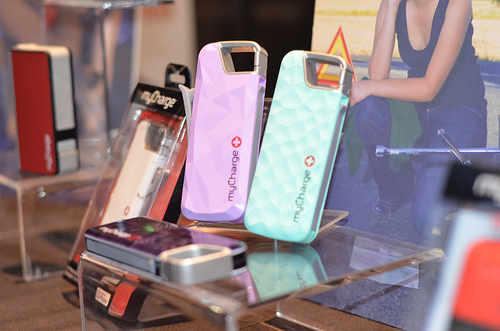 Nothing sucks more than having 100 places to be with 2% battery life. We’ve all been there before! Portable charging have been emerging for sometime now and for the most part they have been flat out ugly! lol Not now!

myCharge, one of the companies who already have portable chargers in the market, dropped new products at CES 2013 which included the Hub and Jolt series. The “GU Energy Shot” of chargers, the new myCharge Jolt Series delivers a quick boost of emergency power to your smartphone, making sure that you’re never out of touch. myCharge Jolt features integrated charging cables to power micro-USB devices or micro-USB and Apple Lightning devices at once, based on model.

Dropping in April, it will be available in three versions – a l000mAh battery capacity to charge one micro-USB device, a 2000mAh battery version to simultaneously charge two micro-USB devices, and a 2000mAh version to simultaneously charge one micro-USB and one Apple Lightning device retail for $39.99, myCharge Jolt 2000m for $59.99 and myCharge Jolt 2000d for $64.99.

The Hub is a portable power devices for the person who relies on their gadgets everyday and in every way. Equipped with an Apple® Lightning connector, Micro-USB cable and USB port on-board myCharge Hub can charge up to three devices at once, providing the ultimate in portable power for virtually any mobile device (smartphones, tablets, e-readers and more). Hub also has a exoskeleton design which allows for the ultimate customization in color, texture, pattern and finish;  myCharge Hub, available in three versions – 3000mAh, 6000mAh and 9000mAh battery capacities.