March 2013 | Analie Cruz
Facebook Twitter Pinterest Email
If you want to add an extra dose of girly, cute or both, mimoco has released their latest MIMOBOT. The special edition My Little Pony MIMOBOTS lets you relive the 80's nostalgia or introduce the characters to someone else.

We are huge fans of Mimoco over at Tech We Like. Their fusion of contemporary characters to with plain USB flash drives is just an awesome idea to us.

Mimobot comes from the founding brand, Mimoco. Mimoco is a very popular brand in the personalization of digital devices and data storage. That includes USB flash drives and card readers. The two main items are the mimobot designer USB flashdrive and mimomicro USB card reader and drive. It’s not only the design of the flashdrive that makes it worth the money, it’s what comes inside. These mimobot drives include exclusive media, music, and more of the character. As a fan of the character you bought, these are great features.

There are many too many Mimobots to list as faves. I believe that their most popular releases have to be the Star Wars series and Batman series. I have the Catwoman mimobot. With the growing popularity, Mimobot has increased partnership with brands. The latest brand partnership is with Hasbro for the third time to bring you “ My Little Pony: Friendship is Magic X MIMOBOT Series of flash drives, available in up to 128GB. It’s cute! You can get more information from the press release. 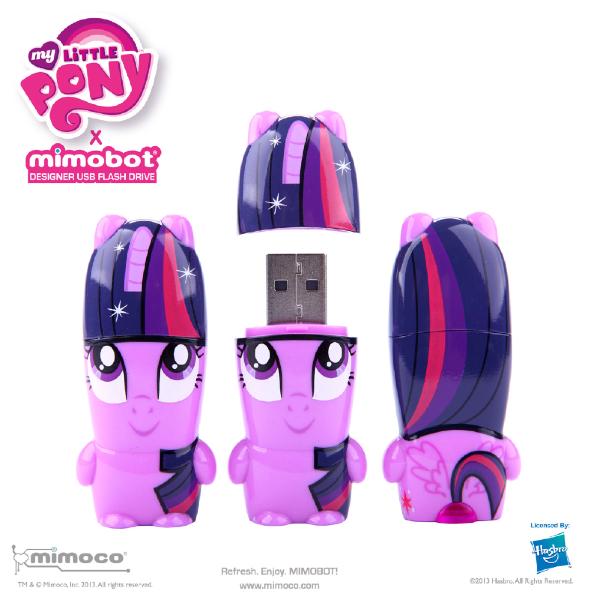 There are three color choices:

Rarity (White and purple): Rarity MIMOBOT is the super glam unicorn of the crew, sporting diamond-esque cutie marks, fluttery eyelashes, and a refined vocabulary. Rarity includes an indicator light that will give off a bright glow to expose buried treasures, like your most recent report or assignment. A precious jewel for any MIMOBOT collector’s trophy case, Rarity is a special-edition product available exclusively at www.mimoco.com.

Twilight Sparkle (Purple and Blue):Twilight Sparkle MIMOBOT is hungry for knowledge and data. From her ‘moondancer’ cutie-mark to her starry eyes, this little pony has seemingly no end to what universal truths she can store – besides her capacity – which, fortunately, can go up to a large 128GB.

Mimoco (www.mimoco.com), makers of the MIMOBOT® and MIMOMICRO® lines of designer USB flash drives and card readers lets fans in on their newest collaboration with Hasbro, spreading Mimoco’s reach all the way to Equestria with the release of the My Little Pony: Friendship is Magic X MIMOBOT Series of flash drives, available in up to 128GB as well as USB3.0 speeds. The collection showcases Rarity, Twilight Sparkle, and Rainbow Dash, three of the darn-tootin-cutest ponies, in MIMOBOT stylistically illustrated flash drive form. Each MY LITTLE PONY MIMOBOT drive also comes preloaded with extra digital goodies called Mimory®. The bonus My Little Pony-themed content includes the MimoDesk® personalization suite of super cute wallpapers, icons, and avatars, exclusive MimoByte® sound software, as well as an entire digital issue of the My Little Pony comic-book, videos, and a preview of the gorgeous new watercolor Pony adventure book “My Little Pony: Under the Sparkling Sea” by award-winning illustrator Mary Jane Begin!

The “My Little Pony: Friendship is Magic animated series has captured Mimoco’s hearts,” says Mimoco spokesperson Jessica Smiley. “Working with Hasbro to make My Little Pony characters in MIMOBOT form was a no-brainer and we are so lucky to be a part of the magic.”

This marks Mimoco’s third collaboration with Hasbro alongside the TRANSFORMERS and G.I. JOE brands. Mimoco is excited to intrigue everypony while adding to their line of drives featuring Hasbro franchises.
Rarity, Twilight Sparkle, and Rainbow Dash MIMOBOT flash drives are now available at www.mimoco.com and in select stores.