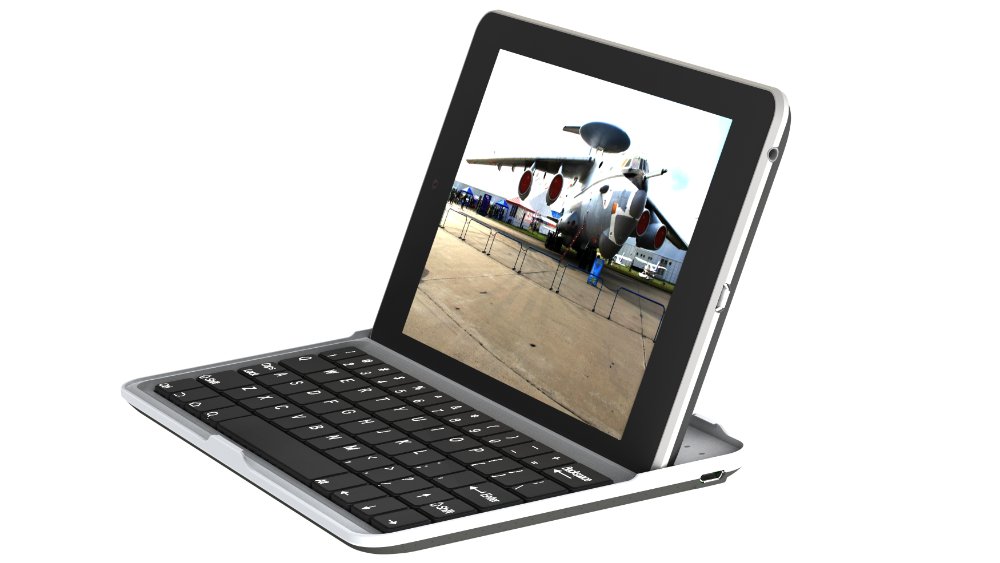 Having a tablet is fun and having a keyboard for the times you don’t feel like dealing with your touch screen keyboard can sometimes be even better. The Mobile bluetooth keyboard for Nexus 7 is just that type of handy piece of accessory to keep around. The built-in wireless bluetooth 3.0 keyboard also doubles up as a case for your Nexus 7. The hard casing definitely receives cool points from me. All you have to do is snap your Nexus 7 into the case. The back of the keyboard has the same design as the Nexus 7 tablet itself. The Bluetooth Keyboard for Nexus 7 has a few other features I would like to list aside from it’s design. The keyboard has a Nexus 7 display stand for easy viewing. What I would like to make mention about the stand is it’s instability. It really is not as secure as I would have liked it to be. I think if they would have built the stand portion to easily lock your Nexus 7 into place then it would be great. If your like me, sometimes I tend to type on my lap. So imagine sitting in the park on a nice spring/summer day and you pull out your Nexus 7 and keyboard, attach your tablet to the keyboard and start typing. Then someone by chance passes by and end up maybe given the slightest tap to you and your device, guess what’s going on the floor with a possible cracked screen? Yes your Nexus 7 tablet. So in my personal opinion it would be best used on a table/desk which kind of limits it’s usability.

Next is the Built-in rechargeable lithium battery which last approximately 55 hours per charge. That’s some good charging time depending on how much work you are doing on the keyboard. And, it’s not like if the keyboard battery is dead you wouldn’t be able to complete your work. You can always go back to using the touch screen keyboard that’s built into your tablet. In testing the battery life for the keyboard I would have to say the company is true to their word. The battery does give off a lot of charge time. What would have been even more awesome is if the keyboard had a battery indicator light so that you have an estimate of how much battery time you have left. The Bluetooth Keyboard for Nexus 7 also has a special home screen key that will give access to a variety of applications with just one touch. The keyboard is said to be light weight, has quiet keystrokes, waterproof and dust proof. Although, for the most part it’s true, I wouldn’t say the keyboard is light weight. It does carry some weight to it and add the Nexus 7 onto that, it can get a little heavy. But, to each their own.

Now I want to get into how the pairing works. First you press the power toggle switch and the power and Bluetooth indicator light will turn on for 5 seconds before shutting off. Once that’s done you press the connect button. The Bluetooth indicator light will start blinking which means the keyboard is ready to connect to The Nexus 7 device. When you turn on your Bluetooth on your Nexus 7 tablet it’s going to ask you to type in a password. Type the password provided on the keyboard itself because you won’t be able to type it from your Nexus 7 itself believe me I tried it; then press the enter key and your Nexus 7 will be connected to the keyboard.

Even though the Bluetooth Keyboard for Nexus is created for Nexus 7 tablets, the keyboard is also compatible with iPhone 3G, 3GS, 4G and iPod touch as long as it has iOS 4.0 or later installed on the devices. For other devices, you would have to make sure it reaches Bluetooth standard and compatibility.

Overall I love the concept and the ease of the keystrokes when typing on the keyboard but, it wouldn’t be something I would use on a regular basis given a non secure lock in mechanism for my Nexus 7 tablet. I definitely wouldn’t mind using it as a case for my tablet. the hard shell casing will definitely keep my screen safe. Other than that, the keyboard itself is simple to use and worth giving a try depending on your needs and location of use. If you are interested you can check it out at Mobilefun.com