Holiday Gift Guide – Tablets to Shop for in 2014 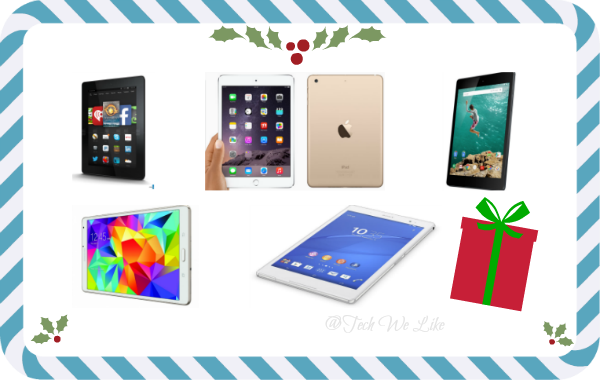 Facebook Twitter Pinterest Email
So many tablets, so little time. Here are some of the best tablets to hit the stores this year. Check out the features, pricing, specs and links to info.

Tablets are one of the items I get asked about almost as much as phones. With tablets ranging drastically in size, price and specs, many are confused as to which tablet to get and why. Here are a few of the tablets that came out this year. There’s something for every type of of giftee on the list

I had more time to do a full review of the Google Nexus 9 tablet by HTC. If the giftee on your list enjoys larger tablets, the Nexus 9 might be a good buy for him / her. Right now it’s the only tablet that offers Android Lollipop 5.0 operating system. It’s a big redesign of the OS which just looks pretty all around. The tablet is thin, light, it has HTC’s trademark front-facing speakers with BoomSound technology. The stunning screen and long lasting battery will have you entertained for hours.

If you want to get some work done, get the add-on keyboard which just attaches magnetically to the Nexus 9 and gives you a tablet workstation. The Nexus 9 is available in 3 colors: black, white, and sand. The Nexus 9 is a simple lookingl tablet with all the bells and whistles that make it a powerhouse device as well. Available in 16GB or 32GB.

Buy from Google Play or HTC  or Amazon.com

Sony doesn’t get as much credit as they deserve in the tablet industry. The Sony Xperia Z3 Tablet Compact came out a couple of months ago. Like most of Sony’s products the Xperia Z3 tablet compact is waterproof (can be submerged . This small tablet comes with big specs, such as a quad-core Qualcomm Snapdragon 801 processor, and a 4500 mAh battery for long use.

The beautiful 8″ inch screen has front facing speakers to its sides for a great entertainment experience. This tablet is great for those who love playing their PlayStation 4. With the Sony Xperia Z3 tablet compact you can play via PS4 Remote play (as long as you’re on your home’s Wifi network). Make no mistake, this is a premium tablet that combines regular viewing entertainment and gaming.

If you want a larger version of the tablet check out the Sony Xperia Z2 tablet. This tablet has a 10.1 inch screen. It is water and dust resistant as well. These tablets are great for those who are prone to spills and cer Learn more here

Starting at $499 Learn more at Sony or Amazon.com

If there is a techie in your family who enjoys reading on the regular, the Amazon FIre HD Tablet is a great choice for them. When you purchase the tablet you get Kindle Unlimited services which allows you to choose from thousands of books and audiobooks. The Fire HD Tablet is as strong outside as it is inside. The Fire HD has a Gorilla Glass screen to take on falls and scratches.

The Android based operating system Sangria has great functions that allow the tablet to be used by the entire family. This includes different user profiles, and a SmartSuspend mode that will get the most out of the tablet’s battery. If space is the issue for you, you get unlimited cloud storage for all of your Amazon content.

The best part of this tablet, is the affordable price. It starts at $139.99. You can order the kids version of the Fire HD tablet  which comes with a cover and a different type of warranty. You have 5 color choices.

Samsung has many tablets out in the industry. This is by far, one of my faves. Samsung’s thinnest tablet yet doesn’t skimp out on specs or performance. What’s great about about the Galaxy Tab S is that it is available in two sizes. You can get it with an 8.4 inch screen or a 10.5 inch screen. The screen is one of the most crisp out there with (Super AMOLED Display with 2560 x 1600 Resolution).

ToychWiz seems to be at its smoothest on the Tab S. It has nice features such as the fingerprint scanner and Ultra Power Saving Mode to really stretch out your battery life. It’s great for the multi-tasker as well. You can use the multi-window feature to open multiple apps at once.

Not everyone likes Android devices. For those on the Apple eco-system, the choices are a bit more limited but they are still solid. If your giftee will enjoy an iPad more,  you can get the iPad Mini 2 or 3. The iPad Mini 3 has nearly the same specs as the iPad Mini 2, except it has the Touch ID button. That’s a judgment call right there if the extra money for the fingerprint scanner is worth it (compare here).

If your giftee enjoys the traditional iPad, he/she will enjoy the new iPad Air 2. The iPad Air 2 is super thin, weighs less than a pound has iPad’s latest operating system iOS 8.1. One of the best features of iOS 8.1 is Continuity. You can start your work on one device and finish up on the other. The iPad Air comes is available in 3 colors: silver, gold, and space grey. Available in 16GB, 64GB, 128GB.