Last week I went out to the bar. This wasn’t your regular bar outing though. A few of us got a chance to test out the new TouchTunes redesigned app. This app doesn’t only work with your phone, it works with the jukebox at the bar as well. So if your bar has a TouchTunes jukebox, instead of getting up to the jukebox to make your song selection every time, you can pick and pay from the TouchTunes app on your phone. 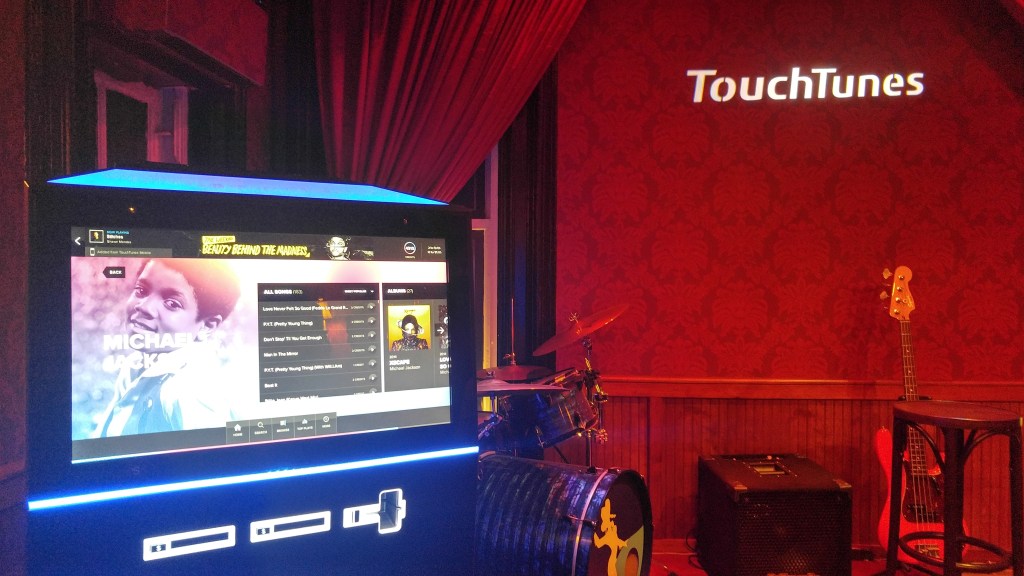 What is TouchTunes and where can you find it?

TouchTunes jukeboxes are found in over 65,000 bars in North America. The app can also help you locate places nearby that have TouchTunes jukeboxes. Or you an use their locator HERE. You can pay for song credits with mobile payment apps such as Apple Pay.

There’s an extensive catalog to choose from, and you will definitely find the latest hits on the jukebox. You can teach the app what type of music you like and it will recommend songs and artists to listen to based on your past choices. TouchTunes also has curated playlists to keep the mood going easily. It brings the music to the forefront, making song selection and playback easier.

Other key features of the app include the following: 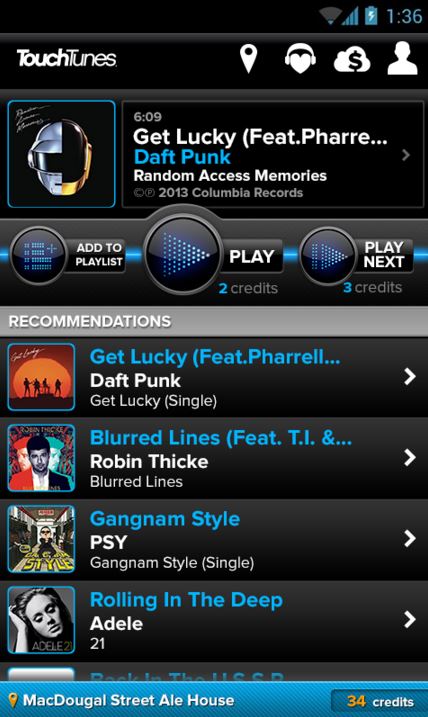 TouchTunes Redesigned App Coming Out Next Month (Press Release Below)

NEW YORK (March 15, 2016) – TouchTunes, the largest in-venue interactive music and entertainment platform, today announced plans to release its newly redesigned mobile app in April.  The new app allows users to be the DJ and take control of TouchTunes’ jukeboxes in 65,000 bars, restaurants and other social hotspots across North America. Its interface boasts an intuitive, music-first design, a personalized user experience and improved usability, enabling users to find nearby locations, search for music, import playlists, earn rewards, and play their favorite songs like never before.

“At TouchTunes, our focus is to empower people to take control of their music experience at tens of thousands of social venues, ” said Charles Goldstuck, Chairman and CEO of TouchTunes. “With mobile technology becoming core to our daily lives, the new TouchTunes app creates an interactive, one-of-a-kind social experience for every user and allows them to be the DJ at their favorite venues.”

The redesigned TouchTunes app was developed in collaboration with Work & Co, the creative minds that have helped multiple Fortune 500 brands launch innovative digital products. It puts music first, highlighting contextually relevant songs and artists throughout the user experience, while at the same time making navigation and music discovery simple and easy.  The app’s personalization features also combine each user’s play preferences with the venue’s vibe to help users discover the music they have in common with each location. Additionally, like the company’s jukebox platform, the app gets smarter the more it’s used, surfacing related songs, artists and genres played the most.

Other key features of the app include the following:

TouchTunes’ next generation app will be available as a free download from the Apple app store and Google Play at the end of April 2016.
About TouchTunes
TouchTunes is the largest in-venue interactive music and entertainment platform, featured in over 65,000 bars and restaurants across North America and 74,000 globally. TouchTunes’ platform provides location-based digital solutions that encourage social interactions through shared experiences. Music is at the core of TouchTunes’ experience with millions of songs played daily across the network and a mobile app that lets users find nearby jukebox locations, create playlists, and control the music in-venue directly from their phone. The mobile app is available on the iOS and Android platforms and has been downloaded over 4.8 million times. TouchTunes’ award-winning products and services also include an integrated photo booth, the first fully licensed commercial karaoke system and an interactive TV messaging and engagement solution. TouchTunes Media is a highly scalable digital out-of-home activation platform that provides targeted advertising and promotional opportunities for consumer brands. TouchTunes is headquartered in New York City, with offices in Chicago, Montreal and London. For more information visit www.touchtunes.com, or visit our Facebook and Twitter social channels.