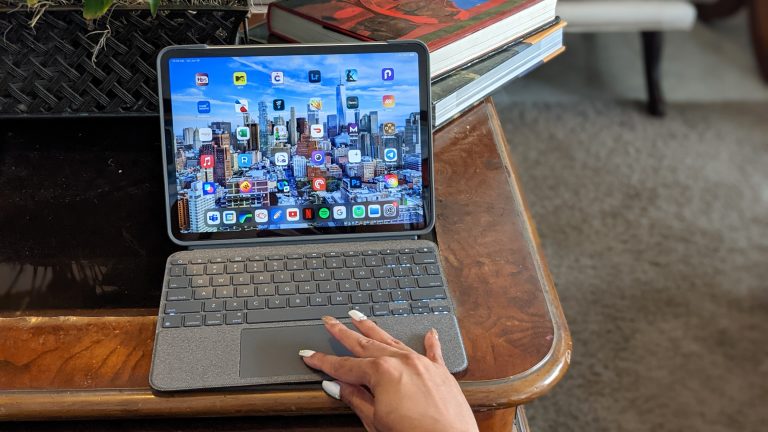 Facebook Twitter Pinterest Email
The Logitech Combo Touch Keyboard Case is a must-have accessory for the iPad Pro. In my review I tell you why I love it!

I’ve had my iPad Pro (11-inch) for a couple of years now. For my use of it, I haven’t had the need to upgrade it. What’s made it useful is the keyboard and Apple pencil.
Logitech has always released great accessories for iPads. Until recently, I was using their iPad Folio keyboard. I was excited to change up to the Combo Touch keyboard since it has a trackpad right on it.

I love how much lighter the Combo Touch is. Even though it’s lightweight it’s still sturdy and I can type on it somewhat comfortably. The case covers most of the edges of the iPad, except of course, where you charge the Apple Pencil. It covers the backside too. Even where it covers the power and volume buttons, it’s thick enough without making it too difficult to press. It’s one of those things that feel like a minor inconvenience until it isn’t.

Four Use Modes with the Combo Touch Case

With the Combo Touch keyboard case you can use the iPad in four modes:

Type Mode: Dock the keyboard upright, pull out the kickstand, and you’re ready to type out notes, emails, and more.

View Mode: Detach the keyboard and pull out the kickstand to watch movies and videos.

Sketch Mode: Fully extend the kickstand for the perfect angle to take handwritten notes and draw with Apple Pencil® or Logitech Crayon.

Experience with the Combo Touch

What makes the Combo Touch Case great is the kickstand. It’s super flexible to give you the preferred viewing angles. the keyboard also detaches easily, something I couldn’t do with the Slim Folio Pro keyboard. It’s great for watching content, think being on the couch or on a plane. The kickstand works perfectly. You can tap on the screen while it’s on the kickstand and the iPad remains sturdy. No shakiness at all. What’s even better is that you don’t have to charge the Folio Touch Case separately. It charges via the iPad (smart connector), so that’s one less thing to worry about connecting and charging.
The backlit keyboard is great for me, as I love working in dim rooms. With the top row dedicated to function keys, the keyboard continues to win.

The Logitech Combo Touch keyboard also wins in the pricing category. With all of the features, it’s also less expensive than Apple’s Magic Keyboard. Starting at $199 for the 11-inch iPad Pro, the Combo Touch is still an expensive but very useful accessory. It’s only available in the grey color. I do wish there was the white option. You can find it at your fave places to shop for tech, Best Buy, Amazon and Logitech.com

While I do wish it had the flap that holds the Apple Pencil, it’s not exactly a deal-breaker for me. It works with the 2019 11-inch iPad Pro and the new M1 2021 versions as well. If decide to upgrade my iPad, I can use the same keyboard which is pretty nice! This Combo Touch Keyboard isn’t the sleekest accessory around but it gets the job done while adding functionality to the iPad.I keep mine on and can’t picture using my iPad without it.