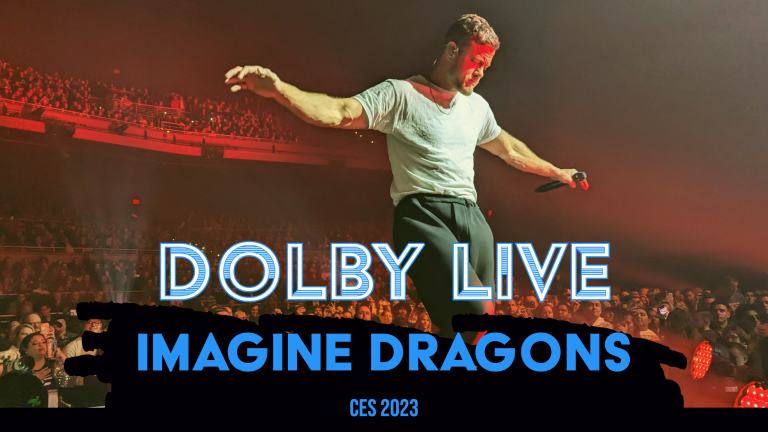 Facebook Twitter Pinterest Email
Dolby Live is a theater with a custom-designed sound system that is built into the venue’s design, delivering an immersive music experience. Imagine Dragons held a special live concert first concert there and it was incredible #DolbyLive

I’ve attended Dolby Atmos movie screenings and listened to Dolby Atmos on Tidal and Apple Music before, but I never thought I’d get to watch a live concert in Dolby Atmos. At CES 2023, Imagine Dragons performed in Dolby Live, located at the Park MGM hotel in Las Vegas, Nevada. It was a concert that benefitted the Tyler Robinson Foundation, the band’s nonprofit which supports families dealing with pediatric cancer. Dolby announced the concert via their social channels, giving away tickets to fans and conference attendees who were in town.

As expected, the concert was AMAZING. If you’ve ever seen a movie in Dolby Atmos sound, you know how immersive and lifelike it feels. Difficult to explain in writing, but the best example is sound that moves with motion. For example, the sound of a plane coming from behind and flying overhead, you hear the sound of the plane come in and fades away as it flies by. That level of immersion made the live concert experience simply amazing. The sound wasn’t overhead or anything of the movie experience nature, but guitar riffs were vivid, and sound came from all around.

Dolby Live \ seats 5,200 and is the first venue to offer live concerts in Dolby Atmos. Dolby showcased Dolby Atmos sound in many ways throughout CES 2023. It’s in consumer devices such as laptops, televisions, sound bars, and vehicles.

As a person who enjoys concerts, festivals, and loud bass, I enjoyed the concert. It was great, and Imagine Dragons is amazing live. You can learn more about Dolby Live and their upcoming lineup of concerts here

You can try Dolby Atmos at their website HERE.

Dolby Atmos is an immersive audio experience that transforming how music is created and enjoyed. At Dolby Live at Park MGM, Dolby Atmos brings live performances to the next level by taking listeners inside the music to reveal details with unparalleled clarity and depth. Whether it’s hearing the layers of instruments move all around, catching the subtle breath a singer takes between lyrics, or being enveloped in a wave of melodies, nothing compares to hearing music live in Dolby Atmos.“