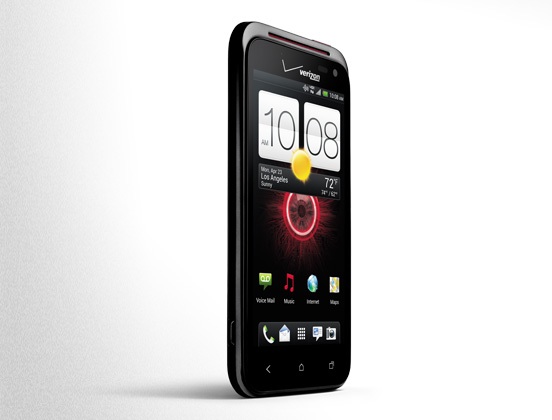 Usually we tend to focus on trying to bring you the latest and greatest – but personally I prefer to get most of my gadgets AFTER the honeymoon period. You know after the people that loved it for 24 hours or swear something is the best of the year after spending 10 minutes drooling over the spec sheet- now can’t stand it. I like to actually see how gagdets hold up day to day in the real world. I’m an extremely busy person and I spin 20 different plates at any given time. I need ALL my gadgets to be able to keep up.

First off – let’s talk visuals. The screen has a 4″ super LCD qHD which sounds large on paper -but the simplicity of the Droid design makes it seem small compared to other smartphones currently on the market. The rubberized textured back adds to the comfortable feel of the phone which also makes for optimal usability. Size isn’t always what matters most.

and the ability to stream every basic audio and image format you can think of – I’d safely put this up against any $300 smartphone on the shelves today.

I’m a minimalist and I like my gadgets sleek yet sturdy – this definitely fit the bill. With my iPhone 5 in one hand and the Droid in the other – weight and size felt basically the same – but i felt much more comfortable tossing the Droid in my pocket when I ran errands sans purse.

To Sum It Up

Believe it or not there is still a huge population of people that either haven’t joined or simply don’t understand the smartphone revolution – so handing them anything other than a flip phone is as frustrating as having great tasting pasta sauce on a bed of uncooked spaghetti – that being said the Droid has a very slim learning curve. To test this theory I handed it to my non tech savy mother and within minutes she was surfing the web, Facebook and making calls – without having to ask me any questions – aside from the usual – how do I download Facebook. Needless to say she enjoyed it and we both agree the call quality is the best I’ve come across so far. There will be some that feel like they NEED a Samsung or Apple – just because.. However – for a smartphone runnung Android OS with decent battery life (24 hours straight) the HTC Droid 4G LTE is the best bang for your buck.

Even without the bells and whistles the phone exceeds all others in the category of simply being a phone. A feature that has been overlooked in alot of higher priced phones I’ve tested over the last 6 months. If I had to find something to complain about it would be the slight 45 second delay I noticed when I make a phone call. For $49.99 and 4G LTE -I’ll happily take it ;)