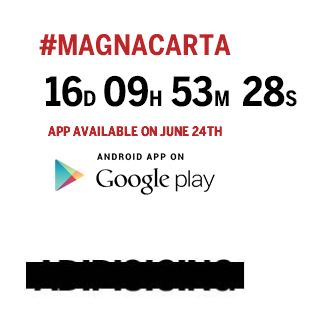 Facebook Twitter Pinterest Email
#MagnaCarta It's been four years since Jay Z's last album, and this time around he is writing new rules for releasing the new album Magna Carta Holy Grail next month. How did Samsung and Jay Z team up for the exclusive release? Find details and directions inside!

We all know that when Samsung releases something, they do it BIG. Jay Z is no different! These two big names have come together in the ultimate partnership for an innovative touch at album releases. 1 million users will get the famed rapper’s album Magna Carta Holy Grail for free through an app at the Google Play store before the official release date.

It’s been four years since Jay Z’s last album, and this time around he is writing new rules for releasing the new album Magna Carta Holy Grail next month. Users with Samsung Galaxy S III, Galaxy Note II and Galaxy S 4 can download the app on June 24th to try and be one of the one million to get the album before its official release.

The Samsung and Jay Z commercial was aired during Game 5 of the 2013 NBA Finals between the Miami Heat and the San Antonio Spurs. The 3 minute commercial shows Jay Z in the studio with producers well known Pharrell Williams, Timbaland, Swizz Beatz, and Rick Rubin. They discuss certain lines, analyze and sound out beats, and talk about how the album should be released and shared. Samsung makes a couple of subtle appearances in form of a Galaxy Tab Tablet and the Galaxy S 4. – Download the Magna Carta app at: www.MagnaCartaHolyGrail.com or from the Google Play Store on June 24th (that’s next week!)

– On July 4th at 12:01 (Eastern Time) the app unlocks the album. That’s 3 days before the official release date.

“The idea is to finish the album, give it to the world at one time.” – Jay Z #NewRules Seems to be the New Thing

Jay Z is applying the new rules to all of his artists including Kanye and J. Cole. You can see a few tweets using the #NewRules hashtag on Jay Z’s twitter timeline. Album exclusives straight to phone apps could be the next be thing. Do you think the trend will catch on?