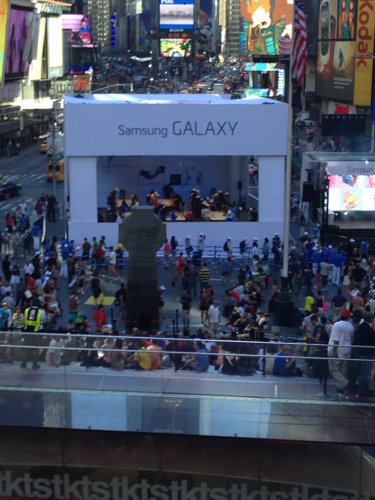 Samsung Unpacked 2013 Episode 1 earlier this year unveiled the Samsung Galaxy S4, when Episode 2 was announced we expected to see the Samsung Galaxy Note 3 but we had no idea they would also unveil highly speculated upon Samsung Galaxy Gear. The actual event was held live at IFA in Berlin, Germany, but it was also a simulcasted in New York City’s Time Square.

After spending some time playing with the Samsung Note II earlier this year I was pretty underwhelmed for a few reasons mainly the size. Since so many people around me swear by this phone I decided to give the Samsung Galaxy Note 3 a fair unbiased try. I must say the specs are impressive and even though the screen is larger at 5.7″ because of the new textured back it actually feels more comfortable in the hand.

The S Pen is said to be faster with more features. If you click the S Pen while hovering over the screen Air Command will populate along with 5 features to enhance multitasking even more without having to toggle from screen to screen, memorize commands or use other menus.

Action Memo – allows users to handwrite a note, and automatically execute a function or convert that handwritten information into formatted content. Action Memo can instantly initiate a call, add to contacts, look up an address on a map, search the web, save a task to a to-do list, and more.

Scrapbook – enables users to organize or track down content and information from various sources including the web, YouTube and Gallery in one place so that users can easily look back at collected content all at once. When consumers save content for future use,Scrapbook also collects source material or URLs allowing them to easily refer back to the original source.

Screen Write – feature captures the full screen image of the current page on the device and allows users to write comments or additional information onto the captured image.

S Finder – allows users to expansively search for content on their device regardless of the type.By putting in keywords or filters such as date, location, and content type, users can search related documents, events, communication threads, and even the Help page all in one place. In addition, users can also search for hand-written content in their Notes and memo applications, as well as symbols and formulas.

Pen Window – allows users to use the S Pen not only for drawing sketches or writing notes,but now also for opening a small application window for a true multitasking experience.Simply by drawing a window of any size, anywhere on the screen, users can easily and quickly open another application window such as YouTube, calculator or Browser without pausing current activity on the screen.

Samsung Galaxy Gear might be the Smart Watch finally done write. The Samsung Galaxy Gear syncs perfectly with the Samsung Galaxy Note 3 letting you get incoming texts, calls, emails, and alerts. Other features are a built in speaker to take voice calls, a 1.9 Megapixel camera to take quick pictures, Find My Device if you cant find your smartphone (also works the other way around from the phone), a pedometer, and control your music. Auto Lock is another nice feature. If you’re far enough away from your Galaxy Note 3 the screen will automatically lock up and when the Galaxy Gear is back within range the Galaxy Note 3 will unlock without you having to input your password or lock design.

The GALAXY Gear also serves as a wrist watch and includes several face options that create the opportunity for users to personalize their watch face.It will come preloaded with 10 different clock options and more choices will be downloadable viaSamsung Apps. The GALAXY Gear experience can be further personalized by selecting from six colors that will be available at launch: Jet Black, Mocha Gray, Wild Orange, Oatmeal Beige, RoseGold, and Lime Green.

Banjo – gives you the power to see what’s happening right now, anywhere in the world.

Glympse – allows people to easily share their location temporarily and in real-time, letting recipients see their movements on a dynamic map.

eBay – app allows you to complete all your transactions on eBay with ease and in realtime.

Line – is a global messaging service available in over 230 countries worldwide.

MyFitnessPal – tracks your nutrition and exercise, empowering you to achieve your personal health and fitness goals.

Path – is the personal network designed to bring you closer to your friends and family.

Pocket, the leading way to save web content to view later on any device, brings textto-speech article playback to GALAXY Gear.

RunKeeper – is the personal trainer in your pocket, helping you track your runs, set your goals, and stay motivated.

TripIt – from Concur makes it easy to organize travel plans in one place.

Vivino Wine Scanner – allows you to take a photo of any wine and get to know all about it instantly.

So far we love what we see and expect to have sample units in office soon for a complete review.