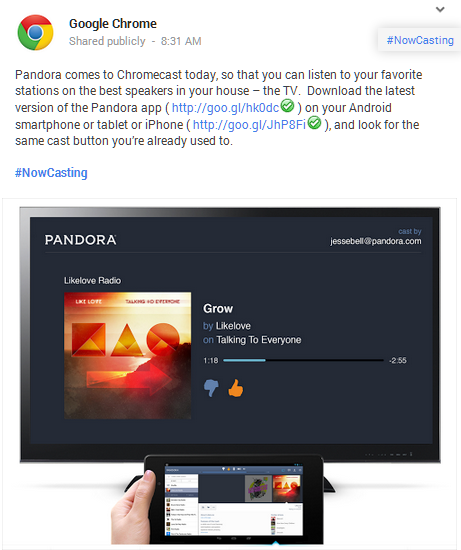 Facebook Twitter Pinterest Email
App support is one of the biggest concerns for the Google Chromecast. Today they announced the Pandora Radio App comes to the streaming device!

Chromecast is without a doubt one of the most bought gadgets in late 2013. The affordable price and easy hookup had it sold out for weeks. The one flaw was app support. When the Google launched the they promised the Pandora Radio App would work eventually.

If you download (or update) to Version 5 of the Pandora Radio App on the Google Play Store, you should be able to broadcast to your Chromecast. But the update isn’t for Android only. According to Google they are also update the iPhone app. Download the Pandora App from the Google Play Store HERE

Download the Pandora App from the Apple App Store HERE

Let us know how the Pandora Radio streaming works out for you: