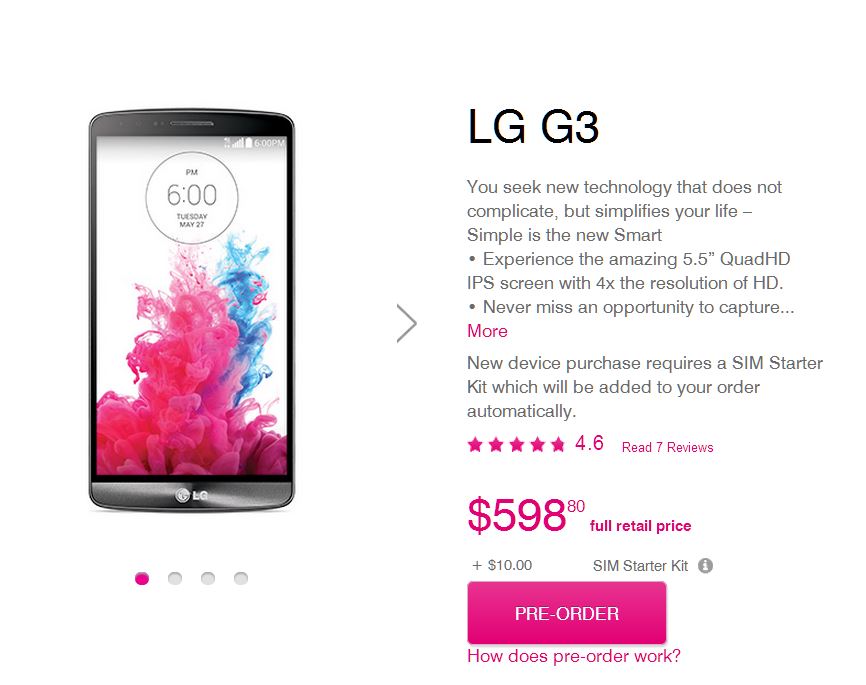 It seems that T-Mobile will be the first to carry the LG G3 smartphone. It’s just been announced that you can pre-order the LG G3 starting today. It will be in stores on July 16th. No information on other carriers yet. T-Mobile had a sweepstakes for where some lucky winners were able to get the LG G3 before its official release. Pricing starts at $598. Learn more about the phone and T-Mobile’s network with specs below.

Since the LG G3 Open Beta Sweepstakes began, people have been clamoring for the powerhouse phone on T-Mobile’s data-strong network, as evidenced through the amazing participation during the last month. The sweepstakes garnered over 74,000 entrants, resulting in 28 lucky winners who were among the first in the country to receive this flagship smartphone before retail availability.

The LG G3 is the first T-Mobile phone in the U.S. to feature a brilliant Quad HD screen, and rounds out T-Mobile’s LG Electronics portfolio which includes the LG G-Flex, LG G2, LG Optimus L90, and LG F3Q for a full lineup at a range of price points. Only T-Mobile delivers the LG G3 with all of the Un-carrier benefits customers enjoy, including zero annual service contracts, zero overages, zero hidden device costs, upgrade anytime with JUMP! ™, Music Freedom, and the world as your network in 120+ countries.