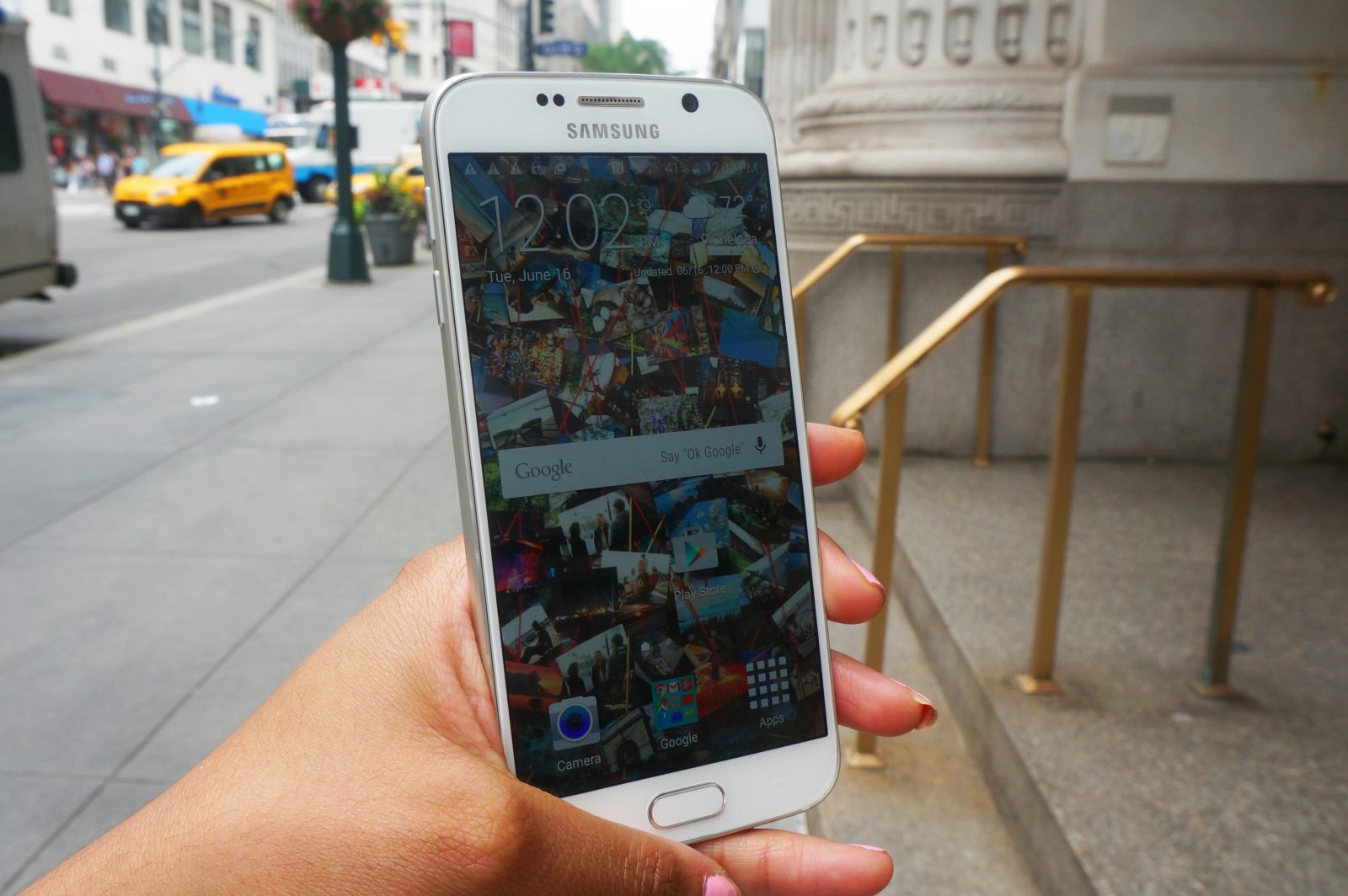 Facebook Twitter Pinterest Email
The Samsung Galaxy S6 promises an all-star performance all around. Is the Galaxy S6 the powerhouse device Samsung claims it to be? Check out our review for details

One of the most anticipated flagship releases every year is the the next Galaxy smartphone from Samsung. It’s no different with the Samsung Galaxy S6. Whether you think Samsung is gimmicky or innovative, their phones are often talked about whether for features or looks (good or bad). When rumors started flying about Samsung redoing the Galaxy S line with the Galaxy S6, many were hoping for nicer hardware and smoother TouchWiz. Did Samsung come through with the Galaxy S6?  Check out my thoughts after the refreshed on the specs.

The design is something to take notice of. Samsung listened to complaints and ditched the plastic body for one made of metal and glass. The Corning Gorilla Glass 4 found on both the front and back, paired with the nice metal trim give the Galaxy S6 a very slim and sophisticated look. It’s a noticeable upgrade from the Galaxy S5, and a necessary one too. 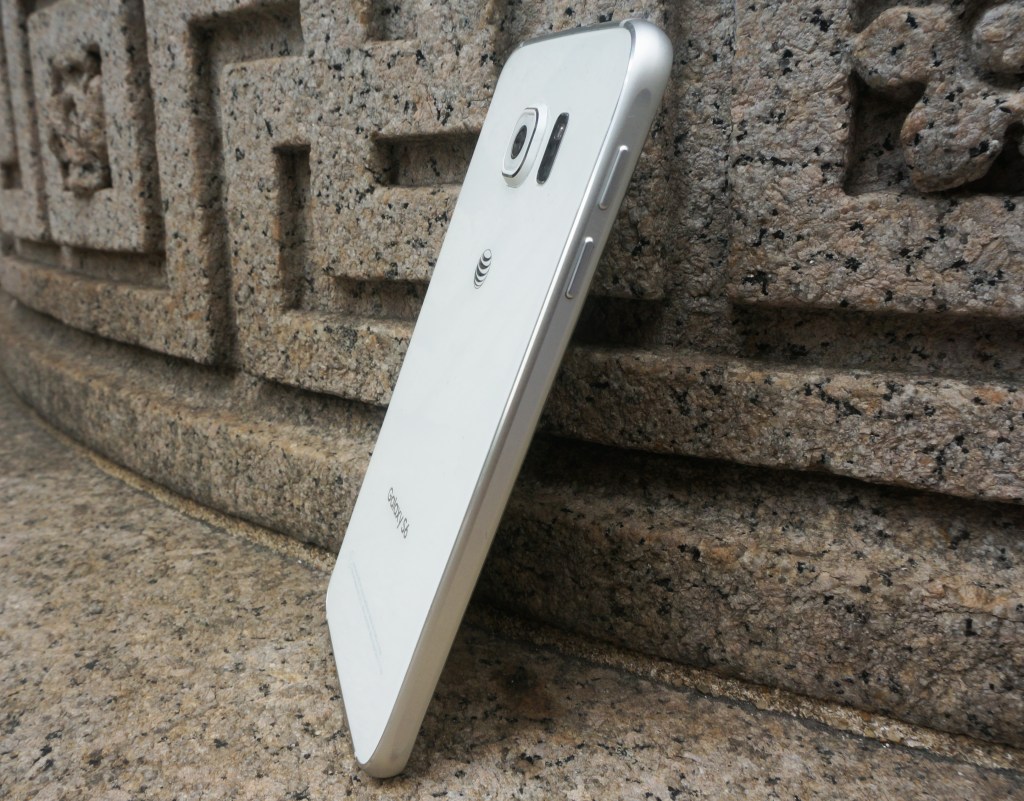 On the front you have a 5.1 inch display, 5 megapixel camera, and sensors. On the bottom you have the home button (with fingerprint scanner), with the recent apps button and back button to the left and right of it respectively. On the backside you have the 16 megapixel rear facing camera, Next to the rear cam you have the LED heart rate monitor. The right border has the power/ standby button and nano-SIM card slot The left has the volume rocker. The bottom border has the headphone jack, micro USB charging port, and speaker grill.
The build and design has a “less is more” type of approach. The simplicity is attractive., because it’s not overdoing it. The phone is so slippery though It slipped off my computer on its own. As beautiful as the phone is, you know I had to slap a case and screen protector on it –fast. The glass is pretty, but it makes me nervous.

Samsung has had beautiful screens in their latest flagships. The Galaxy S6 doesn’t disappoint. The quad HD display has beautiful, bright colors. While some may find it over saturated, I find it pretty, and nice to look at. With 577 PPI, you won’t be able to see any pixels. Just vibrant! For the most part you won’t have trouble looking at the phone outdoors. 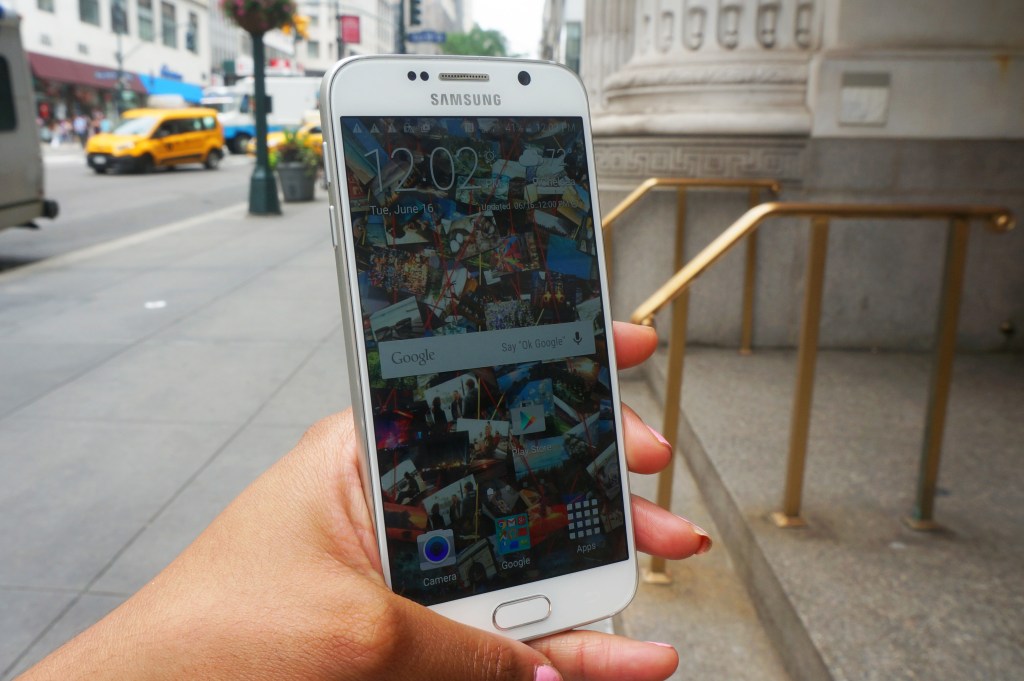 TouchWiz got the makeover it needed, Although it still looks a bit cartoonish, but you can download one of the built-in themes, or a launcher from the Google Play store to fix the look. Samsung does the favor of putting the apps in folders for you, so there isn’t so much clutter. As for maneuvering around, the S6 was a champ. There was no lag, even after having a few apps open.

Check out our review of the Samsung Galaxy S6 Active HERE

The home button isn’t just a fingerprint scanner, it works as a shortcut button to quickly open the camera. It has actually come in handy for me a few times since I love snapping pics with my phone.

Dual Window isn’t one of my go-to features. But I know of people who would love to use this. Personally I’d use it on bigger screens, like the Note 4. But there were a couple times I used it. 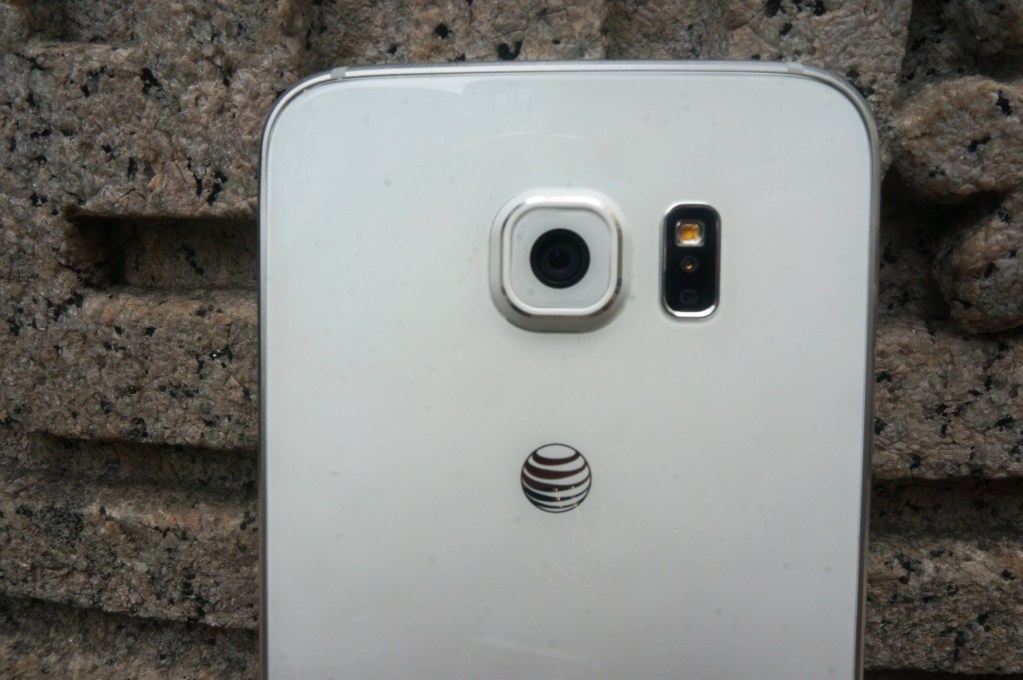 So far the buzz around the Galaxy S6’s camera has been great. I started snapping as soon as I got the phone and it was difficult to stop. As we already know, smartphone cameras can do a lot these days. Somehow Samsung managed to make the camera great. Even if you’re not a pro with the camera, you can get some crisp and professional looking shots.
Camera modes like “Selective Focus” and “Food Shot” (also found on the Note 4, and Galaxy S5) work even better with the Galaxy S6‘s 16 megapixel f/1.9 camera. The camera app is clean. You can download the extra modes, like food shot and “animated GIF” from the Galaxy Apps store. It’s easy to turn the flash on/ off, and pick different effects.
You can do wonders with the camera on “Auto mode”. But if you want to get fancy and professional, and shoot in “Pro Mode”.  In “Pro mode” you can adjust ISO, white balance, color tone, and exposure value to your liking. You can save your custom settings, or use one of the standard settings to work with.

The 5 megapixel selfie cam on the S6 is great. With the wide-angled lens, you can take group pics (without needing a selfie stick), that look decent. You might be able to fit or 5 people

Samsung Galaxy phones never lasted exceptionally long. It might be the screen, or my overuse of it, but I know better than to think it will last a full day on one charge. The Galaxy S6 would las 5 – 9 hours max. That’s a big range, yes. On days I was outdoors and needed to have the brightness all the way up and was using social media heavily the phone wouldn’t make it past 6 hours. I would do the basics to keep the battery alive; such as keeping the brightness down, closing apps and turning off bluetooth when not in use.
The S6 charges quickly, and it gets pretty warm when charging due to the quick charge.

The Samsung Galaxy S6 is available on all major carriers in the US. It’s available in 3 colors: Black Sapphire, Gold Platinum, and White Pearl.
Testing it on AT&T, and Sprint in New York City. I had exceptional coverage and fast service in Manhattan, Queens, and Brooklyn.
Check out AT&T’s coverage map HERE
Check out Sprint’s coverage map HERE
You can check out pricing and details for the Galaxy S6 on AT&T here and on Sprint HERE  Right now it starts at $199.99 with a 2 year contract. You can use AT&T Next to pay the S6 off in monthly installments.

Samsung has done a great job with the Galaxy S6. With the exception of needing to buy a case, so it doesn’t slip out of your pocket (or anywhere else), and a not-so-great (but decent) battery life, the S6 is a great phone for the person that wants powerhouse specs in a small and lightweight package. Be prepared to carry your battery pack and / or charger with you because the vibrant screen and  processor will take its toll on your battery life (even though it does exceptionally well given the screen density, and powerful internals). Get used to backing up your pictures and files often, or relying on cloud storage (unless you go for the 64GB or 128GB), due to non-expandable storage.
Samsung sacrificed those features to get the good looking, great feeling Galaxy S6. It’s a solid device all around, in performance, and reliability.  I have been using cloud storage (such as  OneDrive), so maybe I won’t miss the expandable storage to much. I can’t speak for others. Is this a deal breaker for you? Or is the embedded battery a big con in your reasons to upgrade? I’d really like to know. Are the sacrifices worth the new Galaxy design we have today?