Facebook Twitter Pinterest Email
The UE Roll wireless speaker looks wants to spice up your life with music anywhere, even in water. Check out the review for me details.

Logitech has made a name for themselves in the department of wireless bluetooth speakers. With the popularity of their UE Boom wireless speaker, followed by the release of the UE Mega Boom, Ultimate Ears / Logitech has gained trust in the wireless speaker department. This summer, they released the UE Roll.

The UE Roll is shaped like a CD. It’s round and flat. With the integrated bungee cord you can hang it off of something or lay it flat on a surface. The setup is pretty easy. The UE Roll remembers up to 8 devices.

They are available in 5 colors. I got the Sriracha color combo (red/orange fabric with dark purple figures drawn all over it). The volume buttons are embroidered in light blue fabric and is the same color as the bungee cord. On the other side of the disc, the hard plastic houses the bungee cord, and the hook for the bungee cord. Next to the hook, there’s the power button and the bluetooth pair button. They have lights that stay on when in use. Farther down is the port cover. With the help of this cover, the UE Roll is rated IPX7 waterproof (it can be immersed in water for up to 30 minutes, 1 meter deep). The cover hides the the jack and microUSB charging port.

You can buy the Ultimate Ears UE Roll Speaker at UE.com or Amazon.com 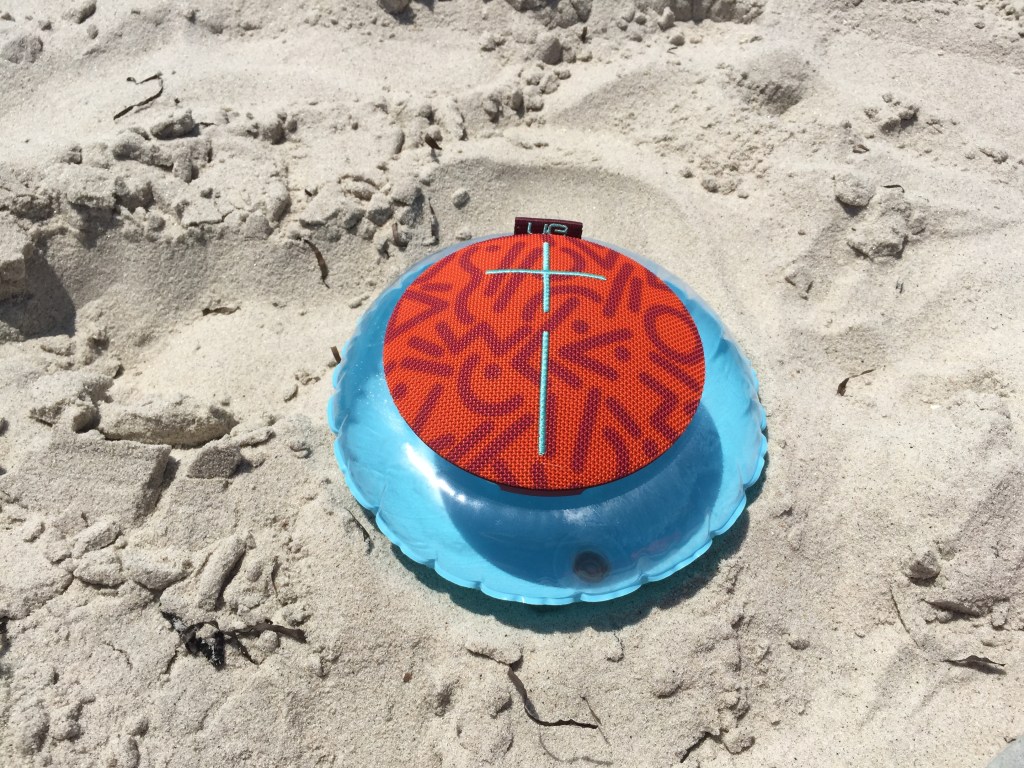 As you can see from the pictures. I enjoyed having the UE Roll around this summer. When I’m not using it at home, it came to the beach with me. It’s nice to have around. I didn’t use the floaty on the water though (I recommend that more for pool or bath use). Make sure the cover is completely closed.

I’ve come to expect big sound from the UE Boom (this includes the Mega Boom and the Mini Boom). When it comes to the sound of the UE Roll, I’d say that I’m satisfied with it. It’s not the most bass heavy speaker, especially when you’re outdoors. It is still loud for the size. It’s cool to put it on a floaty next to you and just jam out to the music. It does a great job with mids, with the vocals coming front and center.

Just like the other speakers, there is an app for the UE Roll. It allows you to control and update the speaker. It also allows you to use some cool features such as alarms (wake up to your favorite songs), customize the EQ to your liking, and if you’re lucky to have more than one UE Roll speaker around, you can pair the two using the app. 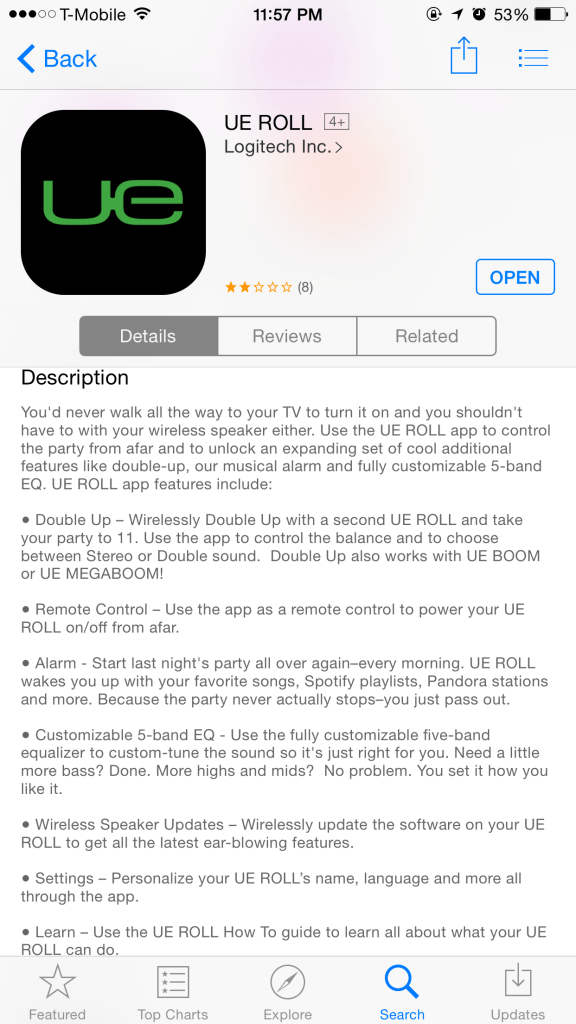 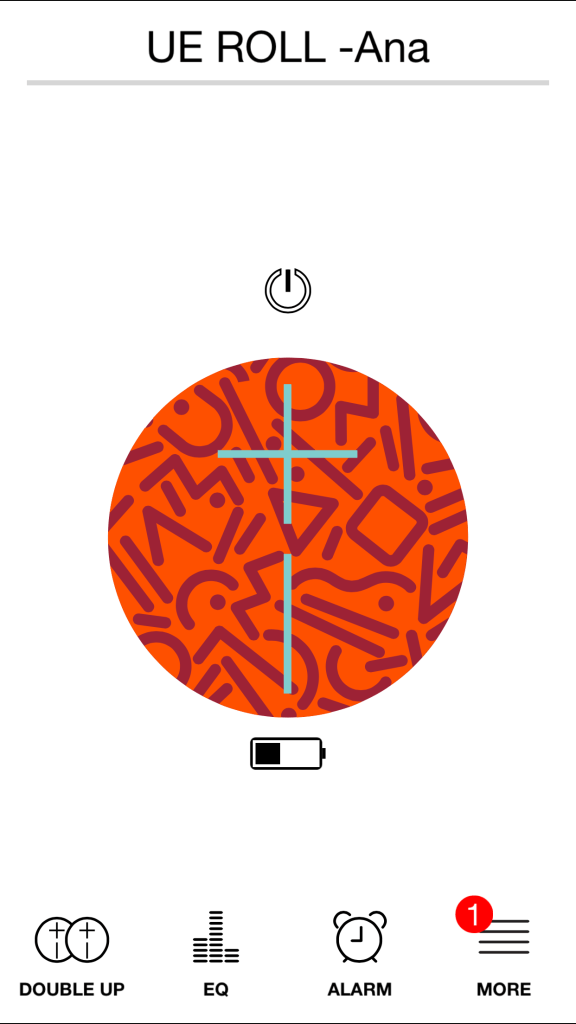 UE claims that the Bluetooth  range of the Roll speaker is up to 65 feet. Of course with walls and other interference in the way, the distance is affected. I was able to walk around my small New York apartment without much trouble. I tried 65 feet in the park, but the sound didn’t travel that far. It was farther than 30 feet though, not bad at all. 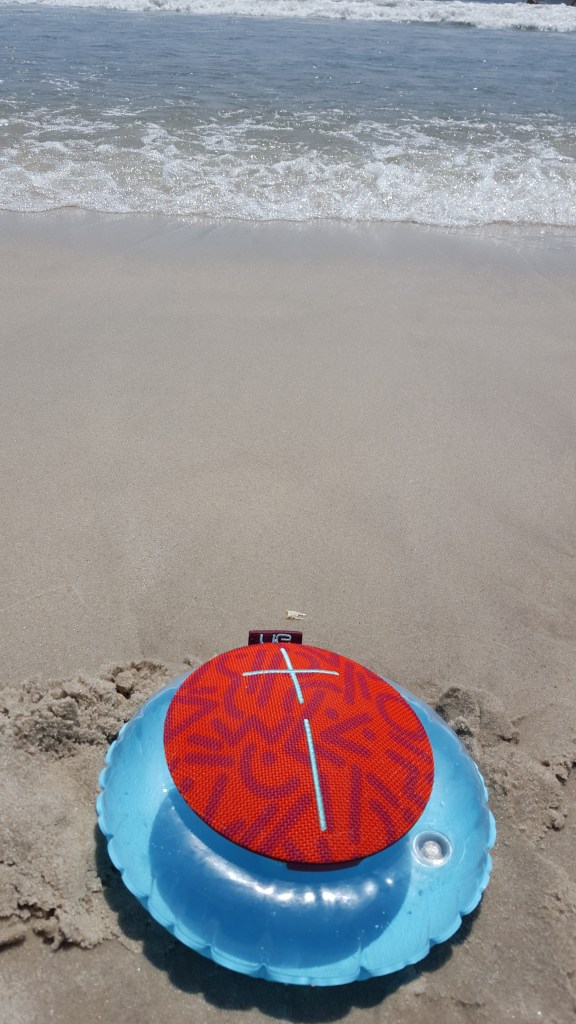 Ultimate Ears says you will get up to 9 hours of battery life on the UE Roll. It came up just a bit short of 9 hours, twice for me. Both those times, the Roll was at 90-95% volume and it lasted about 8 hours and 10 minutes total. When in use with 70% volume it lasted nearly 9 hours. As usual this will vary with everyone.

As usual Logitech came through with a quality speaker. At $99, some may say it’s overpriced. I feel you’re getting a speaker with great build and more than decent sound. The UE Roll takes portability to another level. It has all the features you want in a waterproof speaker. I haven’t seen it on sale yet since it’s so new.

You can buy the Ultimate Ears UE Roll Speaker at UE.com or Amazon.com