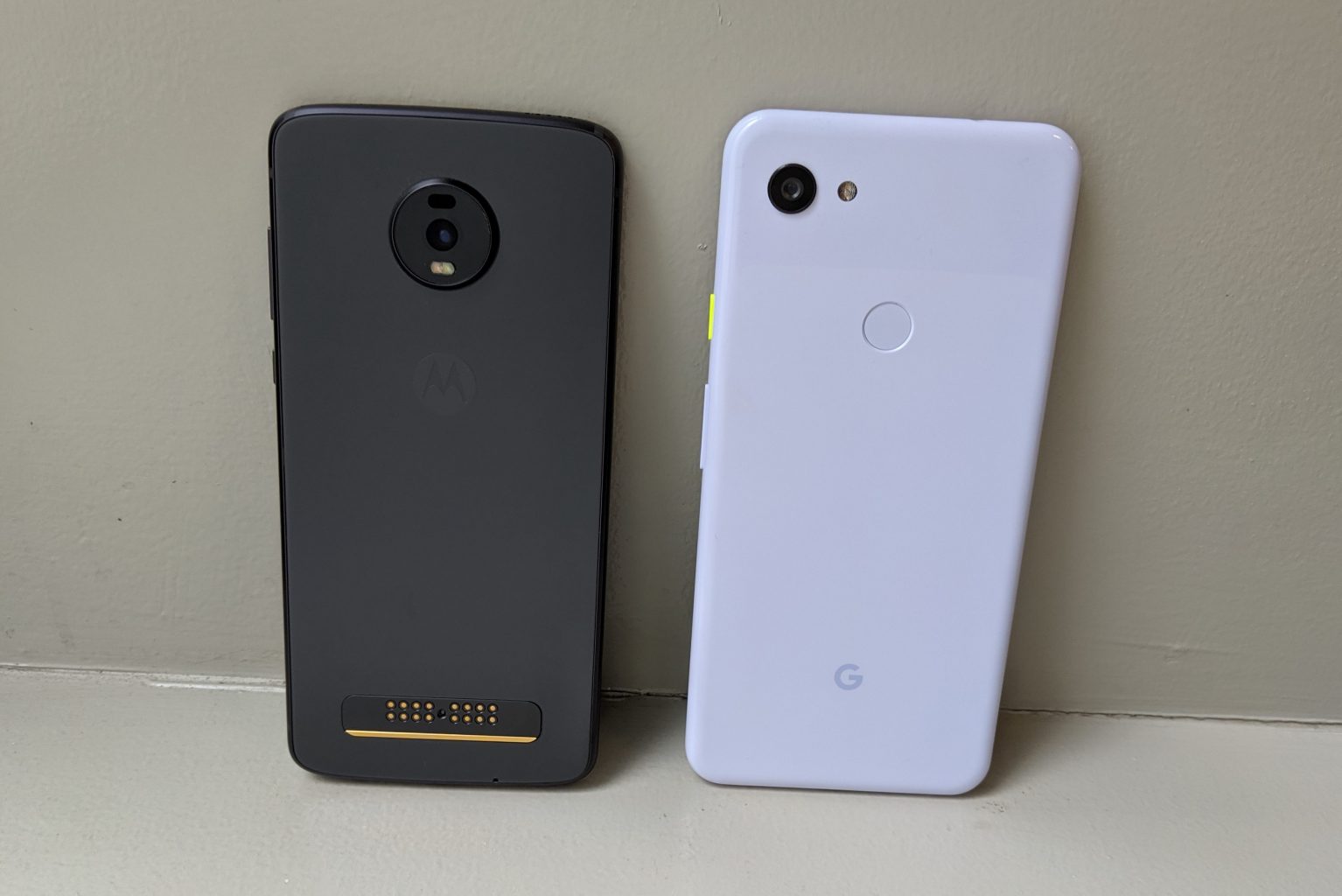 I had my hands on the Pixel 3a and the Moto Z4 for a bit. Depending on what you want, one phone might be better than the other for you. After a couple of weeks with both phones I break down the major differences I found when using them. We reviewed both phones in the last few weeks you can check out the Moto Z4 review here and the Pixel 3a XL review here.

These two phones are completely different from each other. The Moto Z4 has a sleeker sophisticated metal look, while the plastic Pixel 3a has a more “fun” look with colors such as Purple-ish. You can also get the Pixel 3a with a larger screen and battery as the Pixel 3a XL. The Moto Z4 is thin with a large camera bump, while the Pixel 3a has a regular build (not too thin or thick) without a camera bump. The Moto Z4’s thickness can change since it’s a modular phone and you can add different Moto Mods for different functions. So depending on if you’re going with the simple sleek look, or a more fun look you can decide which design works best for you. I must say that I love the Pixel 3a’s purple-ish color since it helps it stand out a bit. But you can also get the Pixel 3a in black for a more generic look. You definitely get the premium feel on the Moto Z4 though

The Moto Z4’s 6.4-inch display is slightly larger than the 3a’s 6-inch display and not getting deep into specifics, the Moto Z4 can get slightly brighter than the 3a XL, which falls closely behind. The screen on the Z4 is nearly bezeless, which is definitely a flagship 20118/2019 feature. The 3a has a forehead and chin. I am not a fan of the Z4’s in-screen fingerprint sensor. It’s hit or miss for me. The 3a’s fingerprint sensor is located in the back, which works almost all the time on the first try.

I use many versions of Android throughout the year, from Samsung’s to LG’s and Google’s versions. It’s been a while since I’ve used Motorola’s version of Android. While it’s not exactly stock Android, it’s close to it. There are of course a few tweaks that make it Motorola’s, such as gestures and that weather/clock widget that we’re used to. Pixel 3a XL runs stock Android. Both devices are running Android 9 with 4GB of RAM (you can run Android 10 Beta on the 3a XL). The performance is fine on both devices since they run Qualcomm Snapdragon 670 on the 3a XL and 675 on the Z4.

As with most phones, especially mid-range phones, you can get excellent pictures with lots of lighting. However, when it comes to regular indoor lighting, you won’t always get the shot on a mid-range phone.

Between the Z4 and 3a XL, I have a clear favorite. I enjoy taking pictures with the Pixel 3a XL. It just gets it right every time. Portrait Mode on the 3a XL is just beast mode. It’s my favorite thing from all the Pixel phones and it doesn’t fail on the 3a XL.

Night Sight on the Pixel 3a XL is amazing. It’s hard to beat. You can take pictures in low light areas with Night Sight Mode on a Pixel 3a, and you’ll get a surprising amount of light, colors, and detail.

Moto Z4 Selfie Portrait Mode: Even when it comes to selfies, I enjoy the Portrait Mode on the Pixel 3a’s front-facing camera. The Moto Z4 has some fun Portrait Mode selfie settings, similar to those found on the iPhone. There are a stage, noir, sunny, and color pop lighting modes. Sometimes it looks blurry or too outlined, but for the most part, they look okay. My favorite Portrait Mode setting on the Z4 is the Color Pop.

I experience a decent battery life on both phones. The batteries on the phones are similar in size with the Z4 having a 3,600 mAh and the 3a XL having a 3,700 mAh battery. As expected, battery life is subject to use, but with regular email notifications, tweets, and aimless Instagram scrolling, I got through the day on both devices.

Both of these phones are great choices when you don’t want to spend $800 to over $1000 for a flagship. All of the basics, such as display, performance, camera, and battery perform well and can be used on a day to day basis. You’ll notice most of the differences in the design and build. Pricing is pretty the same if you decide to get the Moto Z4 with the 360-degree camera Moto Mod which goes for $499, while the Pixel 3a XL goes for $479. If the expense is the issue, you can get the Moto Z4 without a Moto Mod and you could also opt to go for the smaller Pixel 3a.

Whether you pick one over the other is the build preference, camera, and ability to update your phone with the Moto Mods. While Z4 can be modded with the Moto Mods, you’re more likely to get timely updates with the Pixel 3a XL.