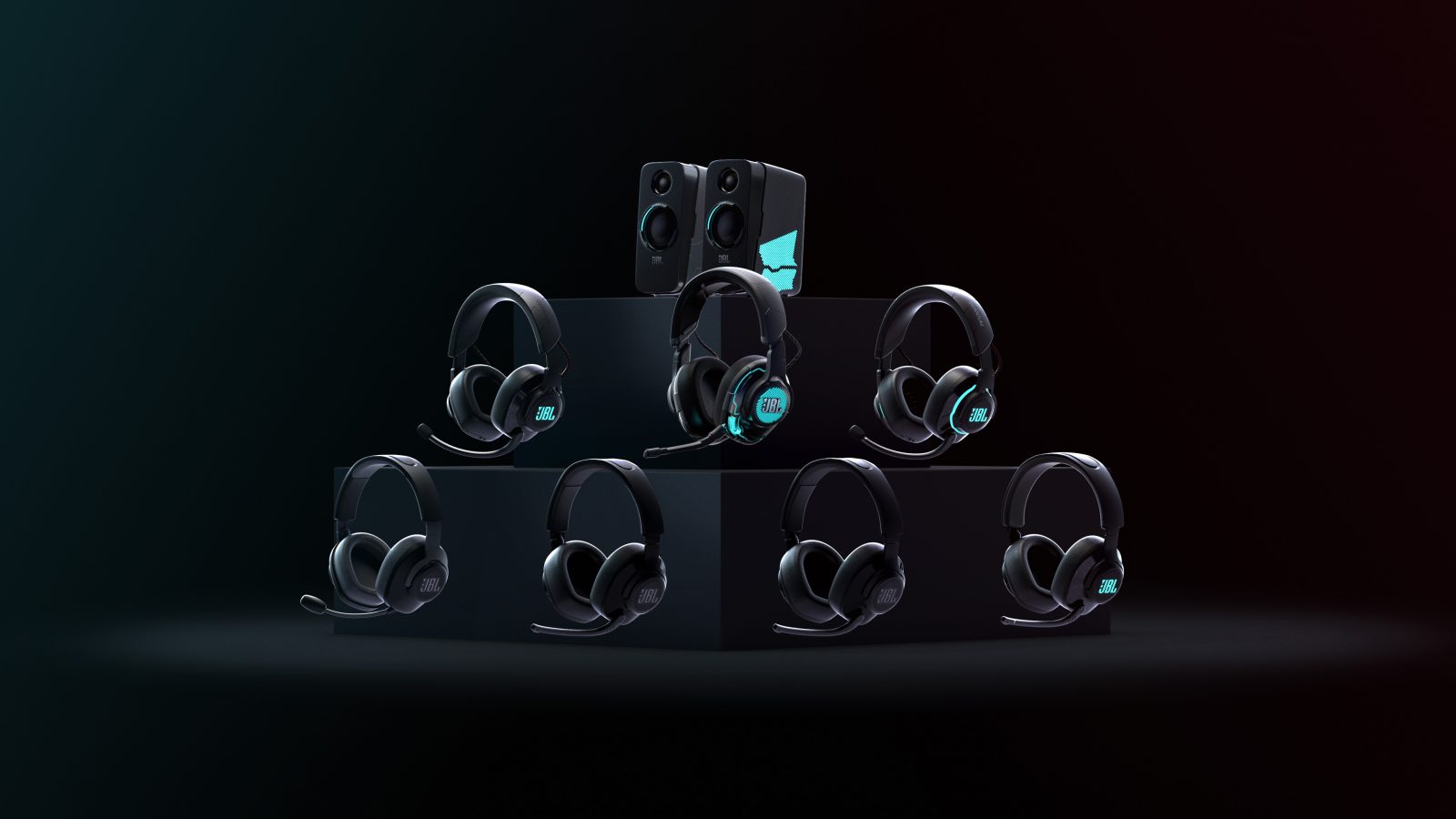 AT CES 2020, JBL has entered the gaming headset space with the new JBL Quantum gaming headset series and Quantum Duo PC speaker. The multi-platform headsets work with all the platforms. Depending on the feature-set you’re looking for, the price ranges on the JBL Quantum series gaming headsets from $39.95 to $299.95. There are 7 headsets to choose from, the JBL Quantum 100, 200, 300, 400, 600, 800, and Quantum One. From wired to wireless, the lineup have a variety of features. The higher-end headsets, 600, 800, and Quantum One have leather-wrapped ear cushions. The headsets will be available beginning April 2020. We will go hands-on later at the JBL showcase.

JBL has also announced the Quantum Duo PC speaker. The Quantum Duo pairs JBL’s proprietary surround sound with Dolby Digital to provide a PC gaming speaker that goes deeper into the action. Players can easily pinpoint incoming fire, hear enemies creeping up from behind or feel the roar of explosive action with JBL’s QuantumSOUND SignatureTM. Exposed drivers and tweeters deliver incredible sound clarity, ensuring that users never miss a step, shot or jump during gameplay. The JBL Quantum DUO’s unique lighting effects supercharge the gaming rig, allowing players to choose from a variety of color options and lighting patterns to visualize the beat. Stay focused on the next epic gaming moment with the JBL Quantum DUO’s plug-and-play intuitive volume and lighting controls. Like the rest of the JBL Quantum Range, the JBL Quantum DUO is fully compatible with any gaming system, including PC, Mac, Windows, and gaming consoles

When it comes to competitive gaming, sound is survival – and JBL knows great sound. Today at CES, the company unveiled the first-ever JBL headset range and PC speaker designed exclusively for gamers, featuring the JBL QuantumSOUND SignatureTM. The JBL Quantum Range delivers immersive audio quality and pinpoint accuracy to provide a true competitive advantage. From the thrill of tracking enemies in FPS games, to engaging in epic MOBA battles, the JBL Quantum Range amplifies victories with a sound experience that transforms each headset into a crown for the everyday champion.

With seven headset models available, from wired to wireless and affordable to professional level, the range includes options for both casual and competitive gamers. The JBL Quantum 300, JBL Quantum 400, JBL Quantum 600 and JBL Quantum 800 feature the newest JBL QuantumSURROUNDTM sound technology powered by the JBL QuantumENGINETM PC software. This allows gamers to experience virtual worlds in added dimensions by adding the height channels that replicate a much wider, realistic spatial soundstage to facilitate next-gen cinematic game immersion. The flagship JBL Quantum ONE takes sound to the next level, built exclusively with JBL QuantumSPHERE 360TM sound technology. This feature uses proprietary algorithms and integrated head tracking sensors, so competitive gamers can hear enemies and movements around them like never before.

“Our world-class team of acoustic engineers worked tirelessly to define the most accurate soundscape in gaming,” said Pascal Van Laer, Vice President and General Manager, Headphones and Wearables at HARMAN. “During the design process we tested extensively with gamers around the world to develop the most advanced predictive algorithm, making every game immersive and every gamer more competitive. The JBL QuantumSURROUNDTM technology is engineered to outperform the most popular spatial sound technologies available for gaming headsets today.”