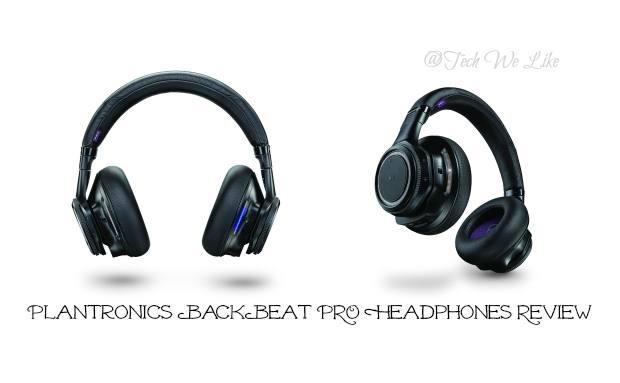 When you first look at the headphones, they look like travelers headphones. By that I mean, the all black design and over-ear car cups The outer part of the ear cups are plastic, with some metallic mesh accents. The headband is leather and the inner frame of the ear cups are made of leather foam. Inside the ear cups is where you will find the only color (purple). The ear cups on the Backbeat Pro swivel 90 degrees inward. Overall the design is really plain and simple. It goes in line with Plantronics other headsets which to me are simply elegant. They’re not trying to compete with colorful plastic headphones out there.

The BackBeat Pro’s are not as heavy as they look. For their size they are a decent weight. They sit very snug on your head without pressure. The ear cups hug your ears nicely creating a good amount of noise isolation to begin with. The leather-wrapped foam has a nice feel. Overall, comfort was great except on some warm Fall days where the humidity was uncomfortable.

I usually don’t expect much power or balance from Bluetooth headphones. It’s usually difficult for them to deliver all around. Plantronics must have gone in hard with the research when it came to the sound delivery of the BackBeat Pro. I went to my usual songs when testing out the BackBeat Pro. I started off with Michael Jackson’s Billie Jean. The Pro’s were loud enough to startle me a bit when the beat dropped. Michael’s voice was ever so smooth over the beat. You can hear the harmonies nicely along the melody. It’s amazing the amount of detail you get on these headphones. Stellar performance for Bluetooth.

I am breaking a terrible habit of listening to all my music at the maximum volume level (unless it’s absolutely necessary to jam out). At 70-85% percent, the BackBeat Pro’s performed wonderfully. Usually at higher levels, headphones can’t take the bass, but I think the Pro’s can take a little more bass and can be a bit louder at times. I can handle it, but it isn’t for everyone. Nearly everyone will be more than satisfied with the volume of the BackBeat Pro. So far, great response to loud volume and heavy bass.

As usual noise canceling is a blessing in certain noisy spots, where it can cut into your music time. But it also cuts into the quality of music. It’s not in a horrible way, just a bit noticeable (on some tracks more than others).

Companies can list features left and right. You’ll remember the most important / useful ones to you. Besides the use of controls for music playback and handling phone calls, the BackBeat Pro have an “open mic” feature. I’m sure many of you have been in the situation in which you’re listening to music, someone says something to you, you don’t hear them so you proceed to pause/ stop the music or remove your headphones. With noise cancelling headphones you’re highly unlikely to hear someone speaking to you. If you click the mic button (on the bottom of the right ear cup) the Pro’s focus on picking up sound, making it easier for you to listen to your surroundings. I didn’t realize how handy this feature was until I was trying to listen to train announcements during my morning commute.

Another great feature is a something small, yet so big in everyday headphone use. Let’s say you want to take your headphones off for a full conversation, or for whatever reason, the BackBeat Pro’s have sensors that stop the music when you remove the headphones from your ears. It also works the other way around, the music will come back on when you put the headphones back on. It doesn’t come blasting up full blast either. It fades in to ease you back into your groove. This feature comes in handy more than you know.

The BackBeat Pro’s actually pair to 2 devices at once. Useful for simultaneous tablet and phone use. You will get notified when the connection changes.

Battery life is always a factor when it comes to traveling, expenses and of course timing. Plantronics states that you can get up to 24 hours of use with the ANC ON. I thought that was a pretty bold statement, but during testing, it actually lasted more than the full day (I left it playing continuously). It will probably last a little bit less if I was messing around with the music.

The Plantronics BackBeat PRO will run you $249.99.

You can get them from Plantronics official website or Amazon.com.

You’re getting a great set of headphones (possibly the best set of active noise canceling bluetooth headphones). You are getting comfortable, great sounding headphones with  amazing battery life. The features, alone set the BackBeat Pro apart from other noise cancelling bluetooth headphones out there. Being able to charge them via micro USB instead of changing batteries is another plus. At times these can be a little louder (very rare instances), so you’re pretty much winning all around with the BackBeat Pros!