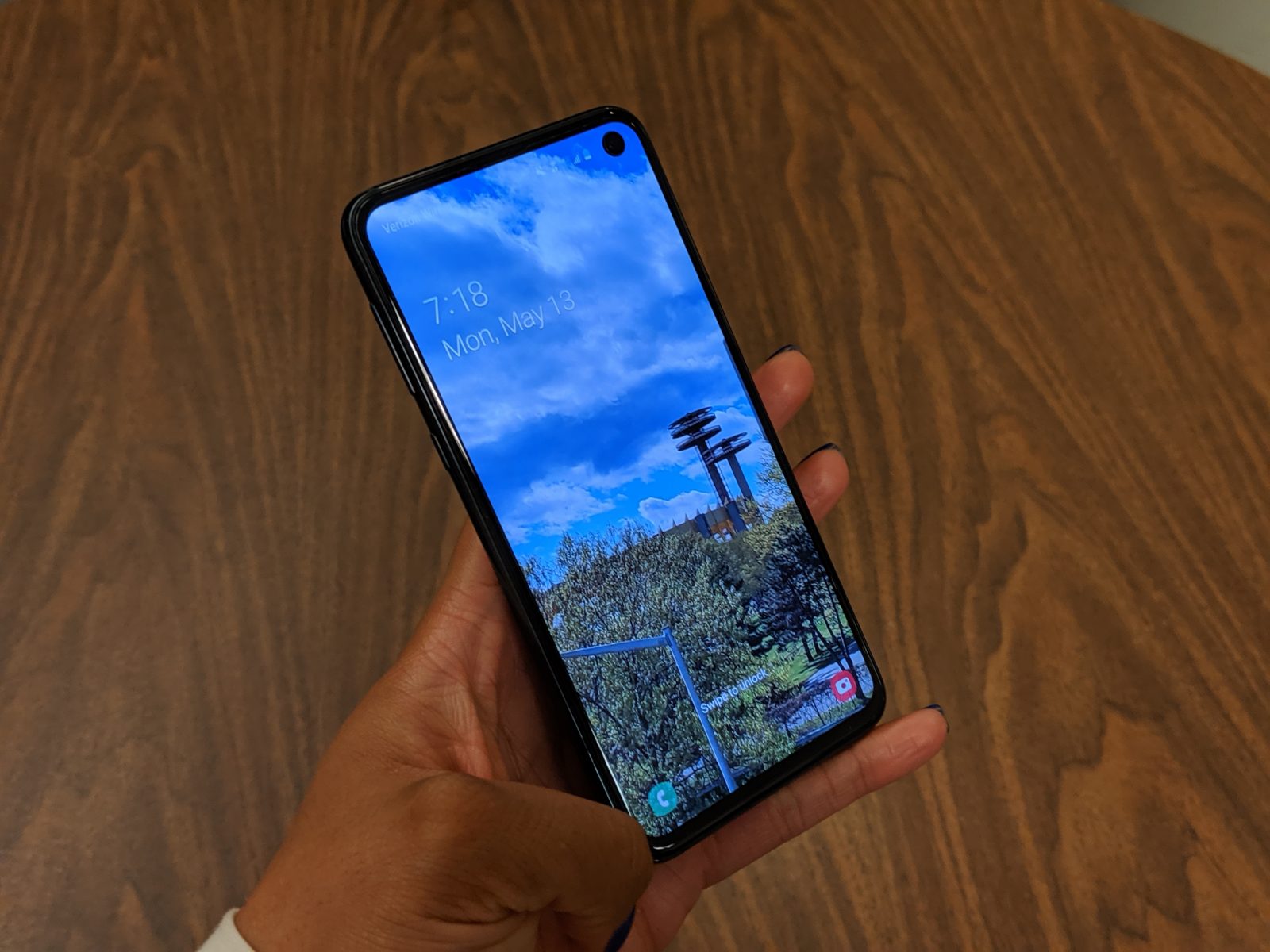 Samsung released three versions of the Galaxy S10, The Galaxy S10+, Galaxy S10, and Galaxy S10e. The 10+ and 10 just differ in sizes of the display and battery and while the S10e is the smallest of the three there are a few more things that make it different from the other S10 models.

The Galaxy S10e is small in comparison to the S10 and S10+. You’ll find that the power button doubles s the fingerprint scanner and it’s located on the right side of the device. You will also find there are “only” two rear cameras as opposed to the three the other S10s have. The punch-hole camera is on the top right corner of the 5.8-inch flat display.

It’s a heavy phone-testing period, so I’ve been floating between devices and they are all way larger than the S10e, so using the S10e is a relaxing change. For the most part, I can use the S10e one-handedly which is nice. And since the screen is flat, my palm doesn’t interfere as much as with larger phones with curved displays, like the S10.

The phone is very slippery. I’ve been using the S10e without a case and it has slipped off my desk multiple times. A case with this phone is a must.
When it comes to performance, the S10e doesn’t disappoint. You can open multiple apps, have music playing and take pics without a problem. The S10e has two different RAM options, 6GB RAM with 128G storage or 8GB RAM with 256GB storage. There are no hiccups in performance at all.

Camera
Like I mentioned before, you only get two rear cameras as opposed to the three rear cameras on the S10 and S10+. It still gets the job done though. I enjoy wide-angled cameras as you saw on the Galayx S10 review and LG G7 review. It’s nice to capture images of entire buildings and landscapes. You won’t have the bokeh effect and you’ll lose details but the pictures look nice anyway.

Wireless Power Share: Wireless PowerShare is probably the most talked about feature, that you’ll use the least. As expected, you can charge another device wirelessly by placing it on the back of the S10e. I tried it with the Pixel 3 XL and it works. It’s easy to find and turn on. Just pull down the notification menu, and toggle it on. I just don’t see where I’d use this feature consistently, especially since most devices have one of the three major chargers (USB C, Lightning, or Micro USB). I also wonder what it will do to my battery in the long term use of Wireless PowerShare. It’s definitely fun to try out and show off, but it doesn’t charge devices quickly enough where I’d use it as an alternative to a wireless charging pad or regular charger.

Menu Options: The little things matter when getting a new phone. There are a few things on the menu, that allows you to customize your S10e to make better use of the phone. The Blue Light filter is something else I enjoy. Doesn’t go full-on night mode, but it does ease the strain on my eyes. Smart Stay has been a favorite feature of mine, for a long time and I am glad to see it there, as I tend to read a lot of articles on my phone.

Pricing and Availability
The Galaxy S10e is the most affordable out of the three S10 models.The S10e I’m reviewing is courtesy of Verizon. Verizon’s service in New York is incredible and keeps on improving. Some background on Verizon:

Overall
If you can give up the Quad HD screen, third camera, and larger battery, you will be fine with the S10e. You get tons of flagship features for under $800. The Galaxy S10e gives you the most bang for your buck!