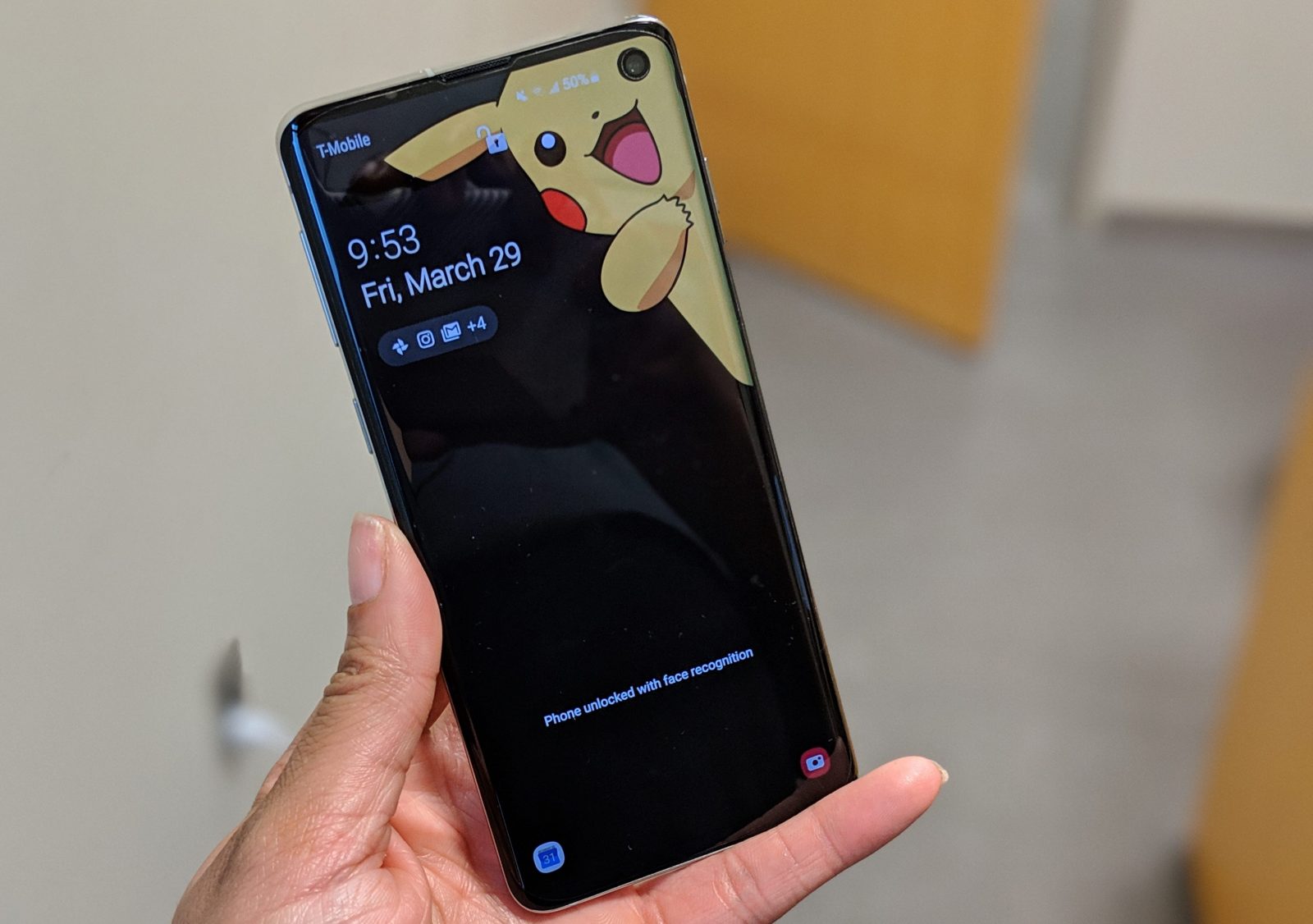 Facebook Twitter Pinterest Email
The Samsung Galaxy S10 has 3 rear cameras, and an ultrasonic fingerprint sensor. What does that mean for everyday use? Check out our review! #GalaxyS10

The Galaxy S10 came with rumors of many cameras and different model types. After a few weeks of use, these are my thoughts on the Galaxy S10.

The feel of the S10 is the “medium-sized” from the three devices released. The display is slightly larger than the Galaxy S9 and smaller than the Galaxy S9+ at 6.1inches. The camera is located on the top right corner, AKA punch-hole camera. No longer near the rear camera, the fingerprint scanner is in the screen. The Bixby button and volume rocker are still on the left of the display. Samsung kept the headphone jack on the Galaxy S10, and the USB-C charging port in the bottom center of the device. What you will find on the back of the S10, are three cameras. Samsung has finally added a wide-angled lens to their regular and telephoto shooters.

Coming from the Galaxy Note 9 and Pixel 3 XL, it was a nice change to use a smaller device. Since the phone is nearly , you still get a large screen in a medium form-factor. I wasn’t sure if the punch-hole would bother me, but I actually prefer it over the notch. The displays on Samsung devices seem to get more and more crispy. At full HD the display looks nice, but at Quad HD, it looks amazing. So crispy and clear!

As for performance, there’s no doubt how zippy the phone is. It’s a flagship device with a Qualcomm Snapdragon processor. It can handle many apps running at once. For me, that includes social media apps, music streaming, and mobile sites. Android Pie is nice. Dark mode makes it easy on my eyes. I am , Dark Mode all the things!

I always recommend a case on a phone, regardless of price. The Galaxy S10 is no exception, it’s so slippery. There is no grip anywhere.

Camera: Samsung switched up the camera layout on the Galaxy S10. The S10 has a nice selfie camera, but it’s no longer on the top center of the phone. The punch-hole camera is next to the notification bar and it fits in pretty nicely. Selfies on Samsung devices are usually heavy on the beauty mode (even if you turn it off), but the S10 is doing a better job of not airbrushing your entire face.

Now onto the rear cameras, that’s where the S10 becomes fun. Having a wide-angle lens is always fun. As expected, the corners of the wide-angle pictures are warped, giving you a slight fish-eye lens effect. But it gets most of the picture in a nice format.

Samsung’s version of Portrait Mode, Live Focus has some fun effects. The detail of the bokeh effect isn’t as defined as I’d like it to be but the effects are fun. You can see some of the color-block and zoom-out effects in the gallery below.

Wireless Power Share: Wireless is probably the most talked about feature, that you’ll use the least. As expected, you can charge another device wirelessly by placing it on the back of the S10. I tried it with the Pixel 3 XL and it works. It’s easy to find and turn on. Just pull down the notification menu, and toggle it on. I just don’t see where I’d use this feature consistently, especially since most devices have one of the three major chargers (USB C, Lightning, or Micro USB). I also wonder what it will do to my battery in the long term use of Wireless PowerShare. It’s definitely fun to try out and show off, but it doesn’t charge devices quickly enough where I’d use it as an alternative to a wireless charging pad or regular charger.

Battery Life: I usually split my screen time between at least two devices, if not three. For a little over a week, I used mostly the S10. The battery life isn’t great, but it isn’t horrible either. Considering the battery size and display, I expected my battery to die quickly. My endless scrolling through social media and video chats with family drained my battery way before the end of the day. I would have to charge the phone in the early evening but I got most of my days just fine.

Fingerprint Scanner: The Ultrasonic fingerprint sensor is being highlighted since it’s been moved from the back to inside the display. It’s actually my first time using a device with an in-display fingerprint sensor. I am personally not a fan of it. I have to leave my finger firmly in place for what seems like hours, but definitely 3 – 5 seconds. Even then, it usually doesn’t work, and I have to try again. Putting in my pin code seems faster to me at this point. I went with the face scan, even though it’s not as foolproof, because the fingerprint scanner frustrates me so much.

Menu Options: There are a few things on the menu, that allows you to customize your S10 better use of the phone. One of the first things I do when getting a device is making sure it’s on the resolution I want. The S10 usually comes with the resolution at Full HD, and while that’s nice, I prefer quad HD. It looks better. The Blue Light filter is something else I enjoy. Doesn’t go full-on night mode, but it does ease the strain on my eyes. Smart Stay has been a favorite feature of mine, for a long time and I am glad to see it there, as I tend to read a lot of articles on my phone.

Samsung and the major carriers have come out with bundled pricing for the Galaxy S10 and the Galaxy buds. There are also a ton of trade-in deals with older devices. The S10 starts in the $849.99 range and goes up, depending on the configuration.

T-Mobile has a great deal on the Galaxy S10 and S10+. T-Mobile service in New York is very reliable with extremely affordable pricing. You can learn more here. They even had a great event for launch day. Stop by one of their stores and learn more.

The S10 is a great phone. You can use it comfortably, one-handed, have a great screen size without the extra bezel and great cameras to snap away with. If you’re looking for the bigger battery and display, the larger Galaxy S10+ is a no brainer. We’ll be reviewing the Galaxy S10e shortly to compare with the Galaxy S10. You can see all the phones and Samsung’s deals at www.samsung.com