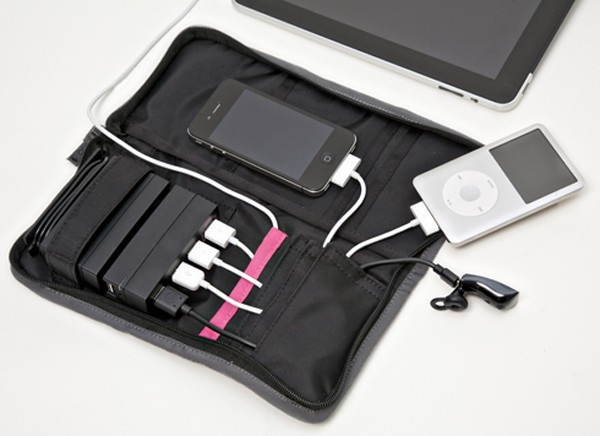 I don’t now about you but after Hurricane Sandy I’ve learned to rely on my portable chargers, my job had no electricity and the only way my devices stayed powered was because I had two portable chargers. We come to see that these devices come in handy are at some point a life saver. The company AViiQ known for Fashion, Technology and Lifestyle mobile accessories has released a new addition to their bestselling Portable Charging Station series of products.

After three years of developing trend-setting designs and innovation for the mobile accessory industry, AViiQ now applies its design mastery and travel experience to the new and improved Portable Charging Station. With its Power Bank and Cable Rack System, it is the ultimate smart travel accessory for the mobile platform age.

“We wanted to respond to our customers with the upgrade path that they have been asked for, and there is no doubt in our mind that anyone who already owns a Portable Charging Station will want to upgrade,” says AViiQ founder Eddie Memon “with all of the new improvements, I’ll never have to worry about losing anything or being out of power ever again.”

The Portable Battery Pack features a flat 5200mAh portable power supply that is integrated into the bag. The key challenge was keeping the profile as thin as the original Portable Charging Station while adding the battery pack feature that could charge your USB devices from anywhere. The final product from AViiQ has done just that by adding only 7mm in thickness to the original Portable Charging Station.

The 5200mAh battery pack gives you ample power to fully charge any device in an emergency. It’s the best of three worlds, a portable battery, a portable cable organizer, and a portable power USB hub.

“Gadgets geeks like me can rejoice, because when traveling, I often run out of power, especially when I have two phones, a headset and camera. Being lost in a foreign country is one thing but being disconnected from my devices is the ultimate sense of being lost.” says Namanh Hoang, owner of Lollimobile.com. The AViiQ Portable Charging Station with Power Bank and Cable Rack System comes with a 100% satisfaction guarantee, a Full Refund Policy within 30 days of purchase, and is available for $159.99 at www.AViiQ.com. For more information about this product, and our entire line of AViiQ products, please contact our Public Relations representative Alan Yeung at alan@aviiq.com

This is one portable charge that may have me retire my old ones.